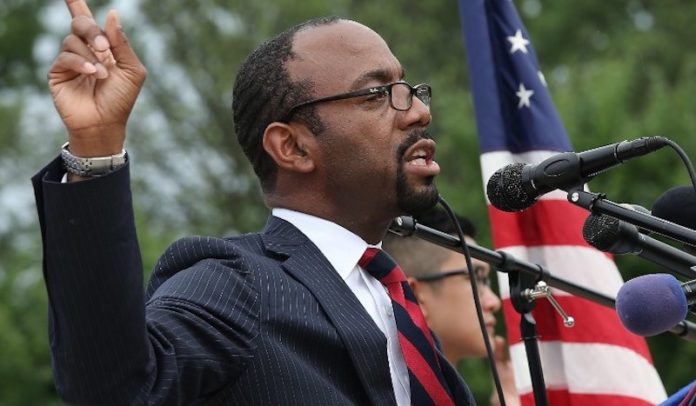 Several NAACP leaders including president Cornell William Brooks were arrested Tuesday evening after one day of protest, according to the organization.

The NAACP is staging a sit-in protest at the office of U.S. Sen. Jeff Sessions in Mobile, Alabama to speak out against his nomination by President-elect Donald Trump for attorney general.

Several leaders of the civil rights organization have thus far participated in the protest, which kicked off Tuesday morning, including NAACP President Cornell William Brooks, and Alabama state NAACP President Benard Simelton. Brooks posted a tweet Tuesday morning declaring that he will continue to occupy the office until the protest results in either Sessions’ withdrawal or their arrest:

The @NAACP & @AlabamaNAACP are occupying the Mobile office of @jeffsessions–untill he withdraws as a AG nominee or we're arrested.@tvonetv pic.twitter.com/7uceDDpz1Y

Trump offered Sessions the attorney general position in November. The move sparked outrage among many who have denounced Sessions’ history of racism and voter suppression.

Sessions was appointed by Reagan for a federal judgeship in 1986. But Sessions was deemed to be too racist for the role and his nomination was later rejected by the Senate Judiciary Committee following a series of confirmation hearings during which he addressed numerous allegations, including that he once called a black attorney “boy,” joked that he thought the Ku Klux Klan was ‘OK’ ― that is, until he discovered that members smoked marijuana ― and referred to civil rights groups, like the NAACP, as “un-American.”

Sessions was also accused of suppressing black votes in Alabama just one year prior to his nomination by Reagan, which became a case that has since haunted his career. In 1985, during his time as a U.S. Attorney in Mobile, Sessions was accused of targeting black voters after his office pursued charges of voter fraud against several African Americans, including Albert Tuner, a long-time civil rights activist who helped lead the 1965 voting rights march in Selma. Turner’s brother, Robert, told USA Today in November that his brother and other black residents who were charged with voter fraud were only trying to assist poor, illiterate and elderly voters in casting ballots. Meanwhile, anger among black critics flared at the time as they accused Sessions’ office for rigorously pursuing cases of voter fraud among African Americans while failing to do the same among white voters. Sessions and those who worked in his office eventually went to trial, during which they denied the claims, and were later acquitted. The outrage over Sessions’ troubled past, especially among liberal groups like the NAACP, never subdued.

“As a matter of conscience, the NAACP has chosen not to remain silent on this critical matter,” Birmingham NAACP head Hezekiah Johnson said outside Sessions’ office on Tuesday, according to AL.com.

“Our main concern is centered around the reality of voter suppression,” he added. “We have found no evidence of his ability, past or present, to be impartial and unbiased as the chief law enforcement officer of the United States of America, especially in the areas of civil rights, voting rights and equal protection under the law.”