frican-Americans have been among the loudest calling for tighter gun control laws, but those demands could backfire if they were actually heeded and enacted through new so-called “common sense legislation,” according to a ranking member of a national pro-gun group for Black people. It’s not a coincidence that more Black people have been buying guns than ever before as the racial divide continues to widen in the wake of the single deadliest mass shooting in modern American history coupled with the election of Donald Trump, the vice president of the National African Americans Gun Association told Al Jazeera recently.

“We have to remember that with every law there has to be an enforcement mechanism for when the law is violated. Our current legal system tends to lean toward draconian punishments for crimes and, given this fact, I am not inclined to believe that a slew of new gun control legislation would be much different,” Douglas Jefferson said in a Q&A. “Given the history of the US, I can see a situation developing where black people are unfairly targeted by such laws. It has happened before in this country and it continues to happen to this day, particularly in the case of drug crime prosecutions.”

Trump’s answer to appeals to tighten gun laws was to infer that Black people need to be policed more, once of the possible consequences that Jefferson may have been referring to.

There is one conspicuous statistic that must be reconciled one way or another, though: Gun violence in the U.S. kills more Black people than any other race. Sooner or later, something’s gotta give.

The racial precedent when it comes to gun laws in America can’t be ignored, Al Jazeera reminded readers.

“Gun control has been used to limit African Americans self-defence groups in the past, most notably the post-Civil War ‘Black Codes,’ which disarmed African Americans, and the 1967 Mulford Act, which was supported by the National Rifle Association (NRA) and attempted to inhibit the gun rights of the leftist Black Panther Party,” the news outlet wrote. 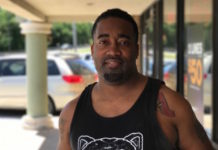 How being wrongly pegged as ‘Dallas cop sniper’ changed his life