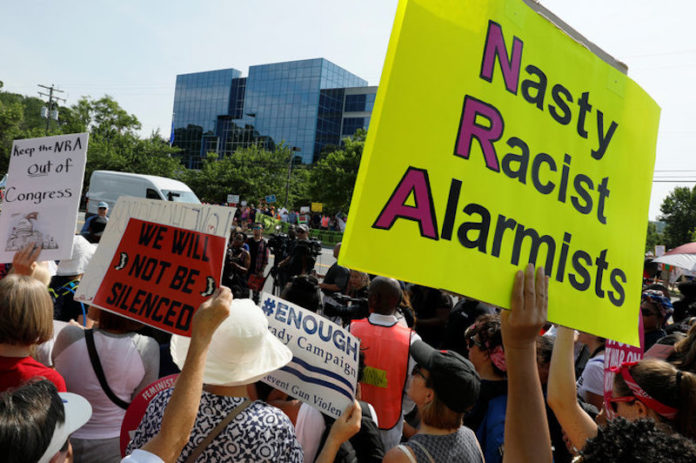 The Black Lives Matter movement against police brutality has inspired so much “racial hatred” that white people in America should fear for their lives, a correspondent for the National Rifle Association’s streaming network said Wednesday.

“But nowhere is near as bad as it is in South Africa where white families are being tortured and killed almost every day in racist violence. It is a warning for the United States that you will never hear from the mainstream media in this country,” he added.

He then turned the segment over to “frontline correspondent” Chuck Holton, a freelance cameraman for the Christian Broadcasting Network.

Violence in South Africa is “kind of a warning for what could happen in the United States if we continue to let this get out of control, to go down this path of this racial tension,” Holton said. “This racial hatred that is being forced on the American culture by the Black Lives Matter crowd.”

Hate crimes in South Africa have long been an issue, but it’s primarily refugees, immigrants, and the LGBTQ community that suffer. In March, the country launched a “hate crime unit” to combat growing violence against Nigerians. Murder has gone up and gender violence continues to claim lives. A 2015 study by the Institute for Justice and Reconciliation showed that the majority of people in South Africa agree with a united nation making up all the different groups in the country, but concluded that “structural legacies of apartheid continue to reinforce old patterns of socialisation and prejudice.”

The NRA neglected to include basic hate crime information about the country in their segment.

In America, the Black Lives Matter movement was created as a response to the repeated cases of police officers violently targeting black people amid the release of documented evidence of racial bias in police precincts across the nation. And as the group’s name suggests, the organization’s primary goal is to help others understand that black people’s lives are also important.

But the NRA doesn’t care.

“White victimhood is a right-wing tactic that inverts the left’s narratives of minority discrimination and neocolonialism. This tactic denies that there is such a thing as white privilege, and attempts to camouflage white domination,” wrote Charles Villet, a professor at Monash South Africa University in Johannesburg who studies post-Apartheid white identity politics, for The Conversation.

This ideology of white victimhood in South Africa is mirrored in far-right circles and by extremists, including in the manifestos of mass murderers Anders Breivik and Dylann Roof.

The NRA, meanwhile, has continued to spread misinformation and hyperbole. Last month, a minute-long ad soaked in fear and crocodile tears went viral.

“They use their media to assassinate real news,” The Blaze’s Dana Loesch said in the ad. “They use their schools to teach children that their president is another Hitler. They use their movie stars and singers and comedy shows and award shows to repeat their narrative over and over again.”

And at a demonstration Saturday bringing attention to the unjustified death of Philando Castile ― a black elementary school teacher killed by police ― the NRA instead of defending the rightful gun owner lashed out on social media against the protesters.

As Salon points out, just this year the NRA has made ads claiming the Manchester terrorist attacks happened because of “gender bending” and that Americans need to buy their guns before “all the rapists” are released in California.

For all their mocking of it, the trembling, paranoid NRA could really use a safe space right now.