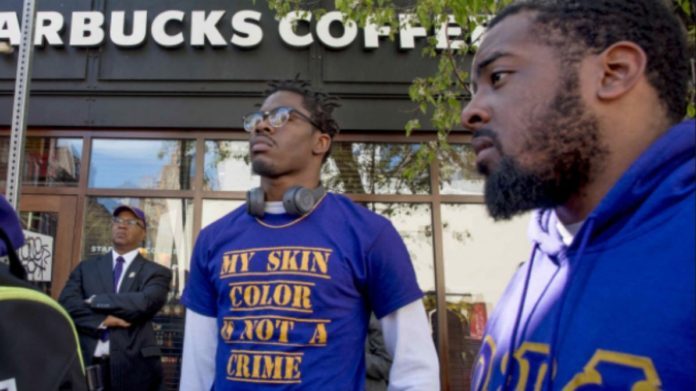 Members of the Omega Psi Phi fraternity showed up in force to protest outside of the Philly Starbucks where their fraternity brother Rashon Nelson was racially profiled and arrested.

Over the weekend more than 100 fraternity members gathered and continued the push to bring light to the injustice Nelson and Donte Robinson faced, reports Philly.com

“The strength of this country depends on us being able to work together as one,” said Grand Basileus Antonio F. Knox Sr., Omega Psi Phi’s national leader.

“We need to take this opportunity to move forward. We’re asking Starbucks, and we’re going to ask others, to partner with us to create change to make that difference, because now is the time.”

Starbucks has announced they will conduct implicit bias training at all their US stores May 29. Some 8,000 of its stores will close.

At the rally, Terrance Jenkins, president of the graduate chapter of Omega Psi Phi said “My skin color is not a crime.”

Nelson and Robinson were at the Philadelphia Starbucks for only two minutes before police were called on them by a racist manager Holly Hylton. They were arrested and hauled off to jail but charges were later dropped. Jenkins, dared his fraternity brothers to take a seat inside the Starbucks.

“Brothers, I do encourage you to take a seat in there. Maybe a minute. Maybe not two. You don’t want to press your luck,” he said.

Rev. Frank Smart, a member of the fraternity and pastor of Greater Mount Zion A.M.E. Church in Trenton, joined the event and said:

“We will no longer tolerate being classified as second-class citizens.”

Camille Hymes, regional vice president in the mid-Atlantic for Starbucks, was on hand at the store.

“We’re looking forward to partnering with community leaders to begin the process of healing in a peaceful and positive way,” Hymes said.

Nelson and Robinson did not attend the rally.