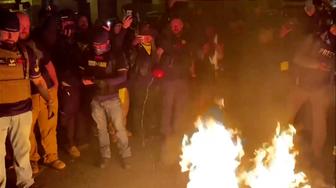 Someone tore down banners supporting the anti-racism movement from at least three churches Saturday night as thousands of maskless “Stop the Steal” protesters marched through the nation’s capital, falsely claiming that the election was stolen from Trump.

The Metropolitan Police Department said Sunday that it’s “aware of these incidents” and encouraged anyone with information to call 202-727-9099 or text 50411.

“We take these offenses seriously, and we are currently investigating them as a possible hate crimes,” the department said in a statement to HuffPost.

The pro-Trump demonstrations, which included members of the Proud Boys far-right extremist group, turned violent when proponents clashed with counterprotesters in the streets, resulting in at least four people being stabbed.

More than 100 city police officers were deployed into the crowd, with some using chemical spray as they attempted to separate people, The Washington Post reported. Police arrested 33 people during the overnight unrest, the department said.