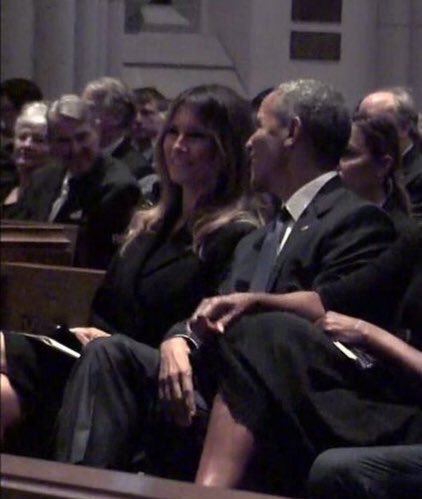 President Trump declined to attend the funeral in Houston, which former President Bill Clinton and Hillary Clinton also attended. Instead, Trump sent his wife to represent him.

There’s been a lot of chatter on social media about Melania Trump smiling radiantly with President Obama before the service began. She’s seldom, if ever, seen having a good time with her husband.

Donald Trump was a leader in the birther movement, which challenged the legitimacy of Obama’s presidency over a false claim that Obama was born outside the United States.

Trump fired up the birthers in 2011 when he began questioning President Obama’s birthplace in television interviews, saying in one instance, “I’m starting to think that he was not born here.” He also tweeted that “an extremely credible source” told him that the former president’s birth certificate is fraudulent.

In another low point, Trump urged hackers in 2014 to get hold of Obama’s college records and check his place of birth—suggesting that the former president was born in Kenya. He continued raising doubts about Obama’s birthplace even after the former president released his birth certificate. Melania Trump reportedly backed her husband’s false birther claims in a TV interview.

The current president has a history of cruelty toward his critics. Indeed, Trump has a long list of opponents he’s attacked personally. Trump has been at war with the Bush family since the two former GOP presidents George H.W. Bush and his son, George W. Bush, openly reject Trump’s presidency.