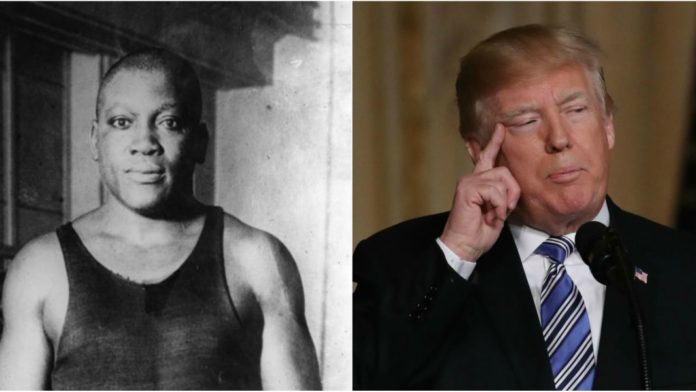 President Donald Trump is learning a lot from his movie star friends.

After his buddy Sylvester Stallone educated him about the perils that Jack Johnson faced as a legendary boxer and the first black heavyweight champion, Trump now says he wants to posthumously pardon Johnson 100 years after he was prisoned for a crime involving a white woman, reports NBC News.

Johnson was convicted for accompanying a white woman across state lines, at a time when whites and blacks were forbidden to mix. But his real crime was being an unabashed black champion who knocked down white men left and right in the ring. His life became the subject of movies and documentaries over the years.

Information Is A Powerful Tool

Trump announced on Twitter that Stallone brought Johnson’s story to his attention. Stallone, best known for his Rocky franchise is in the middle of filming the fight movie Creed 2.

Said Trump: “His trials and tribulations were great, his life complex and controversial,” Trump wrote from his Mar-a-Lago club in Florida. “Others have looked at this over the years, most thought it would be done, but yes, I am considering a Full Pardon!”

Johnson was so masterful as a boxer that his story was reimagined in a play called “The Great White Hope,” starring James Earl Jones. The play earned several accolades including the Pulitzer Prize for drama and the Tony Award for best play in 1969.

Jones later played Johnson in a 1970 film version of the play. In 2014, Ken Burns directed a PBS documentary about Johnson called “Unforgivable Blackness: The Rise and Fall of Jack Johnson.”

If there was a modern-day Jack Johnson, it probably would be a manifestation of Floyd Mayweather. Johnson was flashy like Mayweather and flaunted his money and wealth and white women in the face of white people.

More Than Meets The Eye

It’s a little-known fact that Johnson also was a smart business man and applied for a patent for improvements on the “monkey wrench.” While many memes float around saying he invented the wrench, he actually just improved upon the existing ones.

So why did this newfound information about Johnson’s story get Trump all pumped up? It’s likely Trump just wants to do something Obama didn’t.

Johnson’s family sought out the first Black President in hopes that he would be the one to pardon Johnson posthumously and tried to submit the paper work for procession.

Linda E. Haywood, Johnson’s great-great niece said the Justice Department policy said at the time “processing posthumous pardon petitions is grounded in the belief that the time of the officials involved in the clemency process is better spent on the pardon and commutation requests of living persons.”

But now Trump is supposedly giving it serious thought.

Haywood said, Johnson had an affection for relationships with white woman and in 1913, he was convicted for violating the law which made it illegal to transport women across state lines for “immoral” purposes, according to NBC News.

She said her family never talked about the champ.

They “didn’t talk about it because they were ashamed of him, that he went to prison,” Haywood, 61, said. “They were led to believe that he did something wrong. They were so ashamed after being so proud of him.”

“Johnson’s imprisonment forced him into the shadows of bigotry and prejudice, and continues to stand as a stain on our national honor,” McCain said earlier this month.

Posthumous pardons are rare… and Trump is a proven flake,  so we won’t hold our breath on this promise.