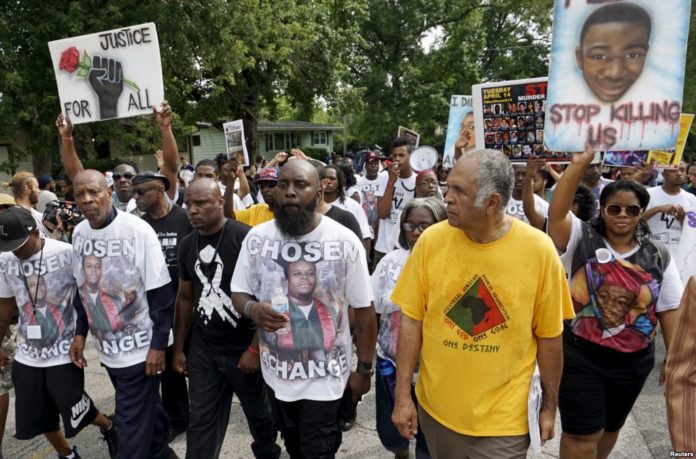 Ferguson, Mo., was once again rocked by protests a day after new footage from the day of Michael Brown’s death was revealed to the public in the documentary Stranger Fruit.

According to the St. Louis Post-Dispatch, word of the video Sunday night drew a group of some 100 protesters, which led to the closing of Ferguson Market & Liquor—where Mike Brown had been before he was fatally shot—and led the police to clear the parking lot.

The situation turned volatile after seven or eight shots were heard shortly before midnight from an area across the street from the market. Someone also apparently stuffed a rag in the gas tank of a police car, but the damage was minor. There were no injuries reported.

Police were seen in video telling people to get off the lot and telling them that they were under arrest. The Post-Dispatch reports that several people were arrested at the scene.

The documentary, which debuted at the South by Southwest festival, raised “new questions” about what happened in the hours before Brown was fatally shot by then-Police Officer Darren Wilson, who faced no charges in the shooting that sparked huge protests across the nation.

In the footage, Brown enters the market around 1 a.m. on the day of his death and approaches the counter, handing over what appears to be a small bag. He then takes a shopping bag filled with cigarillos. As Brown starts to walk through the door, he turns around, hands the cigarillos back across the counter and then leaves the store.

Jason Pollock, a documentary filmmaker who acquired the footage, said that he believes Brown gave a small bag of marijuana to store employees as part of an exchange. He believes that the tape questions the police narrative that Brown was involved in a strong-arm robbery when he came back to the store around noon the same day.

Naturally, a lawyer for the store and its employees refutes that claim.

“There was no transaction,” says Jay Kanzler. “There was no understanding. No agreement. Those folks didn’t sell him cigarillos for pot. The reason he gave it back is he was walking out the door with unpaid merchandise and they wanted it back.”