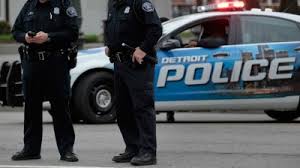 Nearly two weeks after one officer was terminated from the Detroit Police Department for making racist comments about a woman, a second cop has also been fired.

Michael Garrison has been given the pink slip, and DPD Police Chief James Craig said at news conference Tuesday, March 12, that Garrison was charged with conduct unbecoming for using terms like “ghetto, Jakes and Keishas,” failure to report misconduct, failure to take action, willingly and departing from making a truthful statement and neglect of duty. The latter comes from Garrison filing to tell Ariel Moore the reason for her traffic stop.

The video in question was uploaded to Snapchat last month. In it, Garrison and his now-fired partner Gary Steele can be heard making racist remarks about Moore, whom Steele filmed during a traffic stop on Jan. 29.

“Walk of shame,” Garrison said as Steele filmed Moore walking home after her vehicle was impounded for expired tags.

“In the cold,” Steele said.

“Bye, Felicia,” one of the officers said at another point in the post.

Accompanying the video, which was uploaded to the social media site in February, was the banner “What Black Girl Magic Looks Like.” It was a filter intended for Snapchat users to celebrate Black History Month.

Garrison, an 18-year veteran of the force, mocked Black History Month and made racial jokes about Black people with Steele, who was fired earlier this month.

During the Tuesday news conference announcing the results of the probe, Craig, who conducted a separate but parallel audit during the investigation that showed there is a “racial divide” in the department, said there were 11 allegations were made against Garrison.

He also pointed out Garrison’s history of behavior that shows his racist actions are a part of a pattern. Garrison’s junior partner testified to a January 2015 incident where they saw a white man walking and stopped to help the “tax-paying citizen,” as Garrison referred to the man.

“Later on during the shift, they witnessed an African-American male who was walking with what appeared to be bags of groceries,” Craig says. “Officer Garrison’s partner asked ‘are we going to assist?’ and he said, ‘no, we’re not,’ and they kept driving.”

As for his pattern of conduct, Craig said he had a prior case in which Garrison made false statements during a probe. Garrison was fired in April 2014 for improperly using his firearm. But after a two-day an arbitration he was reinstated following a 60-day suspension.

He has now been fired from the department, effective immediately.

The DPD chief said the department will be putting together a report to present to the Wayne County Prosecutor’s Office.