DefenderNetwork.com
Home NEWS National Somalia on the brink of famine and time is running out 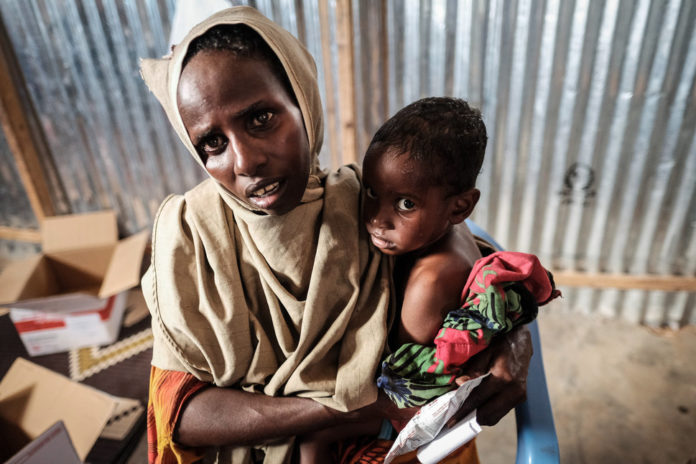 When Nunay Abdi’s last goat died and her small piece of land dried up, she set out for the city with her six children in search of food and water. By the time she reached the southwestern town of Baidoa, some 60 miles from her village on foot, the 45-year-old single mother realized that two of her children were missing.

In a state of delirium from hunger and thirst, she couldn’t tell if she had forgotten them somewhere along the way, or worse, lost them to dehydration and starvation. The worried mother waited in a camp for displaced Somalis for two weeks for news of her children, aged 4 to 16 years old.

She eventually reconnected with them, but the youngest passed away soon after from severe malnutrition.

Abdi’s story isn’t unique ― there are many more like her here in Somalia, where conflict and climate change have wreaked havoc and brought the country to the brink of famine. And if things continue in this fashion, life for those like Abdi will get worse before it gets better.

Somalia is no stranger to the dangers of climate change. Rainfall has been erratic here for the past three years. And the current drought comes on the heels of a famine in 2011 that killed over 250,000, most of whom were women and children.

Back then, we responded too late. Death came for many before famine was even declared. The lives lost were a tragic price to pay for our collective inaction. Today, the warning signs are here again. This country could soon face its third famine in a quarter of a century.

Drought used to come once a decade and only in parts of Somalia. Now, the conditions are more regular ― about every other year. The current dry spell is affecting the whole country, with experts fearing it could be more deadly than the last, so deadly it could lead to total collapse. And climate change is wearing down Somalia’s ability to cope. A state of emergency has been declared. More than 6 million people ― over half of Somalia’s population ― are in need of aid.

As their farms dry up and their cattle die, it’s impossible for people, many of whom are herders who rely on water, to escape the harsh environmental reality each day. They leave their homes, walking miles on the parched dirt in search of help. Carcasses dot the deserted landscape in their wake. To make matters worse, it’s not only drought driving people from their homes but conflict too. Many are robbed along the way, and some women have reported sexual abuse.

Somalia hasn’t had an effective government in two decades, creating a vacuum for militant groups and making it one of the most dangerous places to work in. In 2016, it was named the most fragile state in the world on the Fund for Peace’s Fragile States Index. And violence and terrorism mean gaining access to the growing refugee population is a constant challenge for humanitarian workers like us.

Since November, thousands of displaced people have come to Mogadishu, Somalia’s capital, where I live. This recent influx, made up of those who abandoned their homes in rural areas, join the approximately 1 million people already displaced by decades of violence in this country.

It has become common to see women and children begging in the streets of Mogadishu. As I traverse my city, I see mothers looking for help. And I see children, some the age of my own, doing the same. Many of them suffer from malnutrition ― some 1.4 million children are projected to be acutely malnourished in Somalia this year ― and clinics are few and hard to come by.

These are the lucky ones who made it to the cities after walking for days. But they are confronted with more challenges upon their arrival. Crowded conditions and a lack of sanitation make the camps and shantytowns ripe for disease, particularly cholera, which is a growing problem. The limited water tastes bad and is often contaminated, but it’s all they have.

Small tent settlements have sprung up everywhere, with some of the most populated areas resembling a desert. Colorful scraps of fabric are the only contrast to the red dirt. Too weak to walk any further, people sit listlessly in front of their makeshift shelters, staring blankly at the world around them. Humanitarians have even coined a name for them: drought dropouts.

Salid Halima is one of them. I met her in a small village called Beled Hawa, northwest of the capital near the border with Ethiopia and Kenya. The 50-year-old woman looks after 10 emaciated cows. There were others, she told me, but she left the remaining cattle back home with her husband and now lives here with a relative and her four children.

“This is the worst drought I’ve witnessed in over 30 years,” she said, worse than the one six years ago. “It has killed most of my animals, and I am worried I might lose family members due to hunger and thirst if the conditions don’t improve soon.”

But in the drought and displacement, there is a glimmer of light. Ironically, many Somalis began this year more optimistic than they have been in decades. A new government has taken office. And though militants still control large swaths of the country, stability is returning to many areas. There is hope.

I saw it in the woman I met on the outskirts of the capital. Halima, a mother of five, started a small business after borrowing money from her community-led microfinance group. That investment shows her faith, sending a message that all is not lost ― that there is a future for Somalia. Local Somalis like her and those from the diaspora are making huge investments. The private sector is growing. But this growth needs to reach everyone, everywhere in Somalia.

We know there will be more droughts due to the changing climate. To respond to them effectively, we need better governance and long-term peace in Somalia. And we cannot afford to wait.

A catastrophe can still be averted, but the international community, including the United States, cannot continue to stall. The nearly $1 billion in emergency funding for famine response in the region, provided in the recently passed U.S. omnibus spending bill for fiscal year 2017, is a significant step. But continued, robust foreign aid will be needed to avoid a surge in death and to prevent famine. The United Nations is requesting an additional $900 million for Somalia this year. But so far, not enough of the necessary funding has been coming in. If we wait until famine is declared like we did in 2011, thousands of lives will already be lost ― and the response will come at an exorbitant economic cost.

Instead of cutting foreign aid ― as the Trump administration suggested in its budget proposal ― the U.S. should continue to show its compassion and support. The generosity of the American people is deeply rooted in that nation’s history, and foreign assistance reflects American values. With some 20 million people on the verge of famine ― in Somalia, Yemen, Nigeria and parts of South Sudan ― now is not the time to walk back that generosity.

We may not be able to undo the past and bring back the more than a quarter of a million lives lost during Somalia’s last famine, but we can imagine for a moment what it would be like for our kids to go without food or water for days. No snacks. None of their favorite candies. Depending on handouts to survive or facing a situation like Nunay Abdi ― walking miles in the face of hunger and thirst only to lose a child to starvation. We can do better, and we owe it to Abdi and others in Somalia to act now before the cost of our inaction is forever engraved on the tombstones of hundreds of thousands more Somalis.