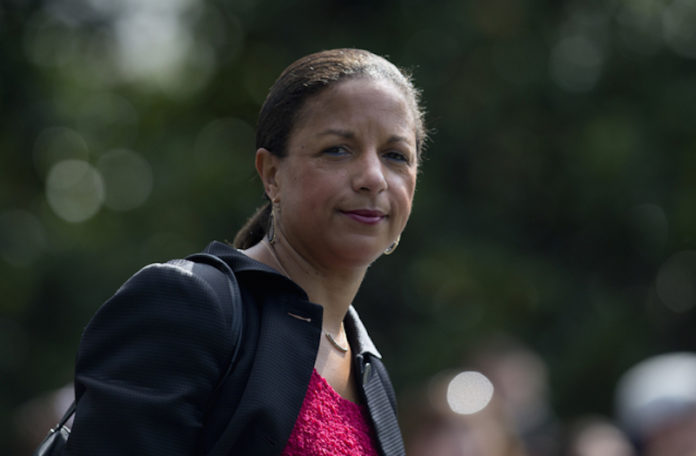 Susan Rice, the top national security adviser to former President Barack Obama, says it is “absolutely false” that she and other Obama administration officials used intelligence reports to spy on Trump associates for political purposes.

Rice, in an interview with MSNBC on Tuesday, said her senior White House role did give her the ability to request the names of Americans swept up through U.S. spy craft. But she would not say whether she saw intelligence on President Donald Trump’s associates or whether she asked for their identities, saying that information would be classified.

According to a U.S. official, Trump national security aides discovered after the inauguration that Rice asked that the identities of the Republican’s advisers be “unmasked.” To Trump backers, the revelations are evidence that the Obama administration was surveilling the incoming administration for political purposes.

“There is a troubling direction that some of this is going in,” White House spokesman Sean Spicer said Monday.

The White House has tried to use the allegations of politically-motivated spying to shift focus away from the FBI and congressional investigations into possible Trump campaign ties to Russia. Trump launched the first salvo last month when he tweeted that Obama had wiretapped his New York skyscraper, an explosive allegation that senior intelligence and law enforcement officials have denied.

The U.S. official said Trump’s National Security Council began an intelligence policy review after the inauguration that included looking into how widely raw intelligence and the names of Americans were disseminated. Rice’s unmasking requests were found during that review, according to the official, who insisted on anonymity in order to discuss the sensitive information.

After viewing the findings, the White House counsel’s office told the NSC to stop the review and not conduct an independent investigation into whether there was improper handling of intelligence.

The U.S. routinely monitors the communications of foreigners. The identities of Americans who talk with those foreigners, or who are discussed in conversations between two non-U.S. persons, are hidden in intelligence reports. However, senior national security officials can request the identities of the Americans if that helps understand the intelligence better.