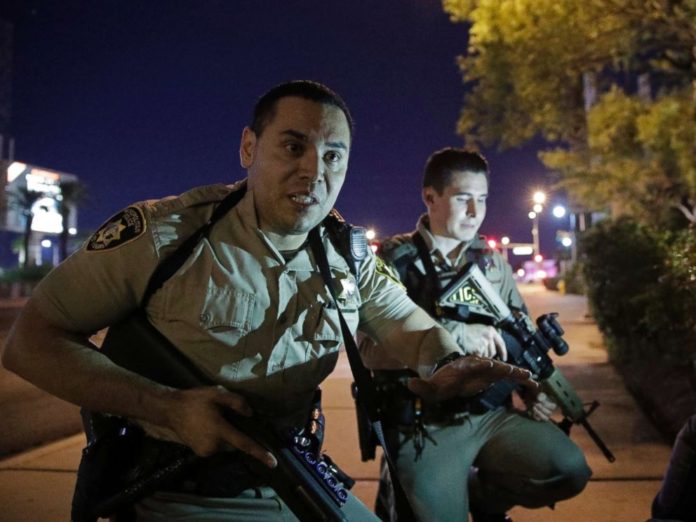 Amazingly enough, Las Vegas law enforcement has already ruled out terrorism for the deadliest mass shooting in modern U.S. history. The finding came just a mere hours after Stephen Paddock loaded his high-powered rifle, aimed and deliberately shot at thousands of concertgoers at the Mandalay Bay hotel on the city’s famed Strip on Sunday night.

The shooting that killed at least 58 people and injured more than 500 was “an act of pure evil,” President Donald Trump said while addressing the nation Monday morning — but not terrorism.

While knowing the motive is crucial to understanding why Paddock decided to kill innocent people, it shouldn’t play any role in defining what he did as terrorism, plain and simple.

But then again, Paddock was a White male, a demographic that has many times eluded being labeled terrorists (even though most mass shootings are statistically committed by White men – by far).

Somewhere down the line, the definition of “terror” for the current generation of Americans got very twisted. Conventional wisdom suggests it was probably right around Sept. 11, when the U.S. renewed its war against what has become “radical Islamic terrorism,” a catchall phrase of political convenience that is seemingly only attributed to Black and brown people. It should be noted that the Islamic State group has claimed responsibility for the Vegas shooting, according to CBS News.

But when, say, a White man goes on a shooting spree in South Carolina and kills nine Black people because he wanted to “start a race war,” the perpetrator is not called a terrorist. Instead, his label is considerably watered down to that of a “murderer” who happened to commit a “hate crime.”

While neither is a flattering term by any means, words have power, and having a legacy tainted by terrorism is far more damning than that of murder.

Trump, who has made a habit out of quickly dubbing instances of violence as “terrorism,” took a detour from that approach early Monday morning and in a tweet called the Las Vegas rampage nothing more than a “shooting.” The president might be able to get by on a technicality, though, as there is not an existing domestic terrorism law on the books, as the Associated Press reminded us this weekend.

But it’s more than just a case of semantics. There is a racial factor in determining what is and isn’t terrorism, author Randall Law told the AP.

“There is a popular thought in America that only “people with foreign names … and people with dark skin funding foreign ideologies” said Law, whose book “Terrorism: A History” was released last year. “Americans are still very uncomfortable with talking about ‘American terrorists’ and prefer to speak of those such as Dylann Roof as insane, or an outlier.”

To be sure, President Barack Obama also didn’t call the Charleston massacre “terrorism.”

While we could always parse words, at least one thing is completely certain: Nevada state law plainly states that what Paddock did can’t be called anything other an “’Act of terrorism,’” which it has defined as “any act that involves the use or attempted use of sabotage, coercion or violence which is intended to: (a)Cause great bodily harm or death to the general population.”