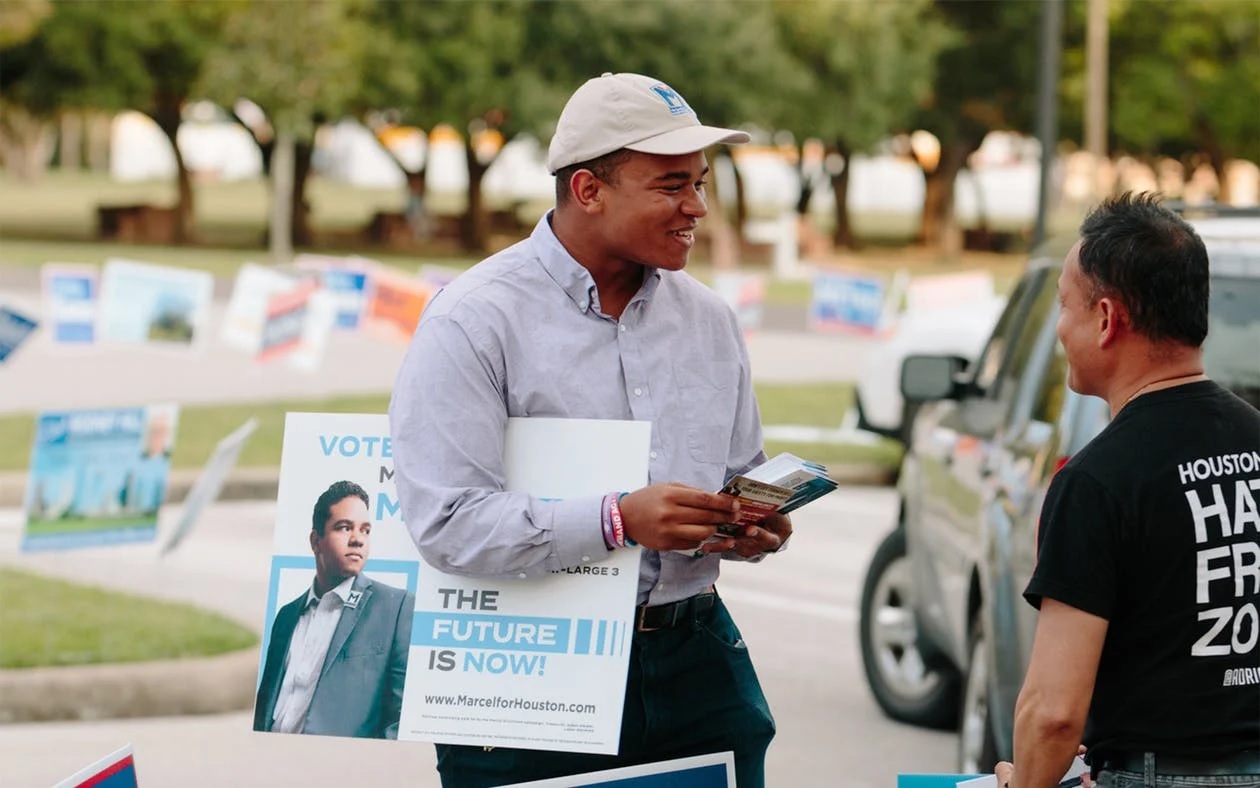 It’s summer 2019, and Marcel McClinton, a baby-faced teenager clad in a pink Hawaiian shirt and blue gym shorts, is hanging out at Rink’s Barbershop in southwest Houston. The seventeen-year-old, up for a seat on Houston’s city council, wants to know what political issues matter to fellow Black Houstonians.

One woman asks him how many people turn out to vote in local elections. “Seventeen percent,” McClinton answers, “and sixty-whatever-percent of that are over age fifty-five and white … no one’s turning out.” Over the buzz of electric clippers, he has a tense exchange with a man named Sweat. “I stay out of politics,” Sweat says. “When you keep not seeing changes, you feel like your voice is not being heard whether you vote or not.” McClinton leans forward, his eyes practically shining with idealism, as he speaks about the importance of increasing voter turnout. “Then they’ll start to listen and you’ll see attitudes change.” The barber pipes up to agree: “Shit will change, shit can change.” Sweat just shakes his head.

The scene captures the tension at the heart of Ready or Not, a tenderhearted and entertaining new documentary on McClinton’s improbable, idealistic, and deeply imperfect run for Houston City Council in 2019. Directed by Austin’s David Modigliani (Running With Beto, Crawford) and Houston native Paloma Martinez, the eighty-minute film debuts on Fuse TV this Saturday; you can also stream it on Amazon starting Monday.

Ready or Not follows McClinton as he balances the rigors of the campaign trail with the ordinary life of a high school senior. He deftly works the room at fundraisers, but struggles to get his homework done and consistently show up to campaign meetings. In the face of every doubter who suggests it’s a waste of time and money for a teenager to run for office, McClinton is indefatigable. So what if his key issue, gun violence prevention, demands reform at the state and national levels, not city council? “I can’t help myself but talk about real issues facing Houstonians every day,” he says in one speech. “We need to wedge our way into the system and make positive change.” Whether you find this kind of rhetoric inspiring or tired will depend on whether you’re a Marcel or a Sweat—on whether you believe that “shit can change.” McClinton certainly does, and by the end of Ready or Not, you just might too.

As a member of Gen Z, McClinton instinctively grasps one of the key tenets of both politics and twenty-first-century life: Personal branding and telling your story is key. McClinton, who is biracial, was raised in a working-class family by a single mom who emigrated from Germany; now she wakes up at 4:30 a.m. to drive a school bus before heading to her second job at Chick-fil-A. His dad is a disabled Army vet. A shot in the film shows a Beto O’Rourke poster hanging above McClinton’s bed; he also shares O’Rourke’s fondness for cursing (“F— the NRA,” he once tweeted).

In 2016, McClinton was teaching Sunday school to preschool students at the Memorial Drive United Methodist Church when a gunman with an AR-15 fired 212 rounds just outside the building, injuring seven people and killing one before he was fatally shot by police. McClinton, who was fourteen at the time, crouched under a window with his young students during a four-hour lockdown. “I remember them shaking,” he says in the film. “We were positive that we were going to die.” 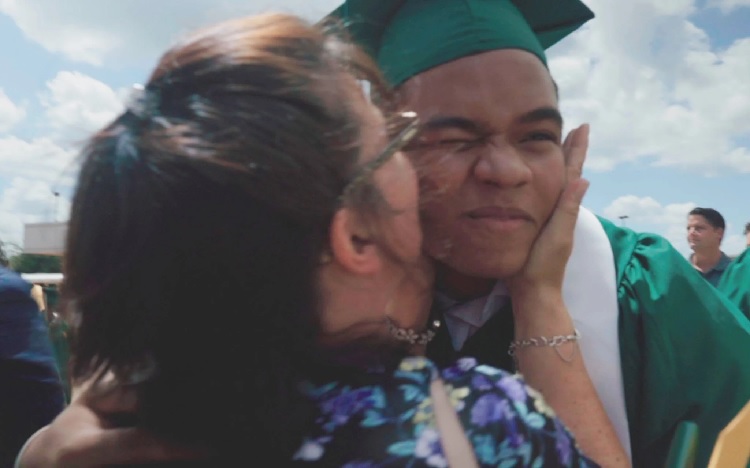 The trauma galvanized McClinton and led him to completely rethink his political views. At fifteen, he’d briefly supported the Trump campaign while interning with the Harris County Republican Party, even appearing on the local news in a Trump T-shirt. But now, inspired by the teenagers from Marjory Stoneman Douglas High School in Parkland, Florida, he began organizing protests and “die-ins” for gun violence prevention, such as Houston’s March for Our Lives Rally. McClinton traveled to speak at the Texas Capitol and in Washington, D.C., and he also served on Houston mayor Sylvester Turner’s gun violence prevention task force, working to create a list of recommendations for the city council. The eleven recommendations included adding background checks at local gun shows and increasing funding for the Harris County Psychiatric Center. But officials proceeded to ignore them entirely—a move that critics allege Turner has employed with other “powerless” task forces.

This was McClinton’s introduction to politics, and it made him angry. So, as the film chronicles, he decides to run for city council himself, centering his campaign on gun violence prevention. A handful of local politicos—including Almeda Dent, vice president of the Texas Coalition of Black Democrats, and David Lee, cofounder of the Texas Signal—soon step up to join his staff. He gets written up in BuzzFeed News, appears on CNN and Pod Save America, and scores an endorsement from Houston’s Black American Democrats.

From the start, McClinton demonstrated that he had preternatural political instincts: Instead of running for an open seat on the council, he chose to challenge incumbent Michael Kubosh, knowing that the contrast between himself and the then 68-year-old, white, wisecracking bail bondsman would make for good TV. (Asked about his young challenger, Kubosh replies, “We’re both seniors. He’s a senior in high school, and I’m a senior citizen.”) Houston voters, including many in Black communities, support Kubosh because he led a successful effort to eliminate red-light traffic cameras in the city. (In a PR stunt, Kubosh ran a red himself and was promptly ticketed.) McClinton persuasively points out that Kubosh doesn’t seem to have done much else, and that his role in the bail bond industry is part of a broken justice system that disproportionately targets and incarcerates Black people.

It’s satisfying to watch McClinton stir things up, and to admire how mature and polished he almost always is. But I confess that my favorite moments in the film—the ones that felt the most alive and authentic—were when the mask slipped and McClinton revealed himself to be, well, a teenager. This comes through in his excellent one-liners:

On football: “Like, the best sport ever invented by man.”

On fund-raising: “It sucks, because it’s tedious and it takes a long time.”

On networking: “What the f— is a Rolodex?”

On baby boomers: “I don’t hate old people, it’s just … I don’t know how to make people feel the urgency.” 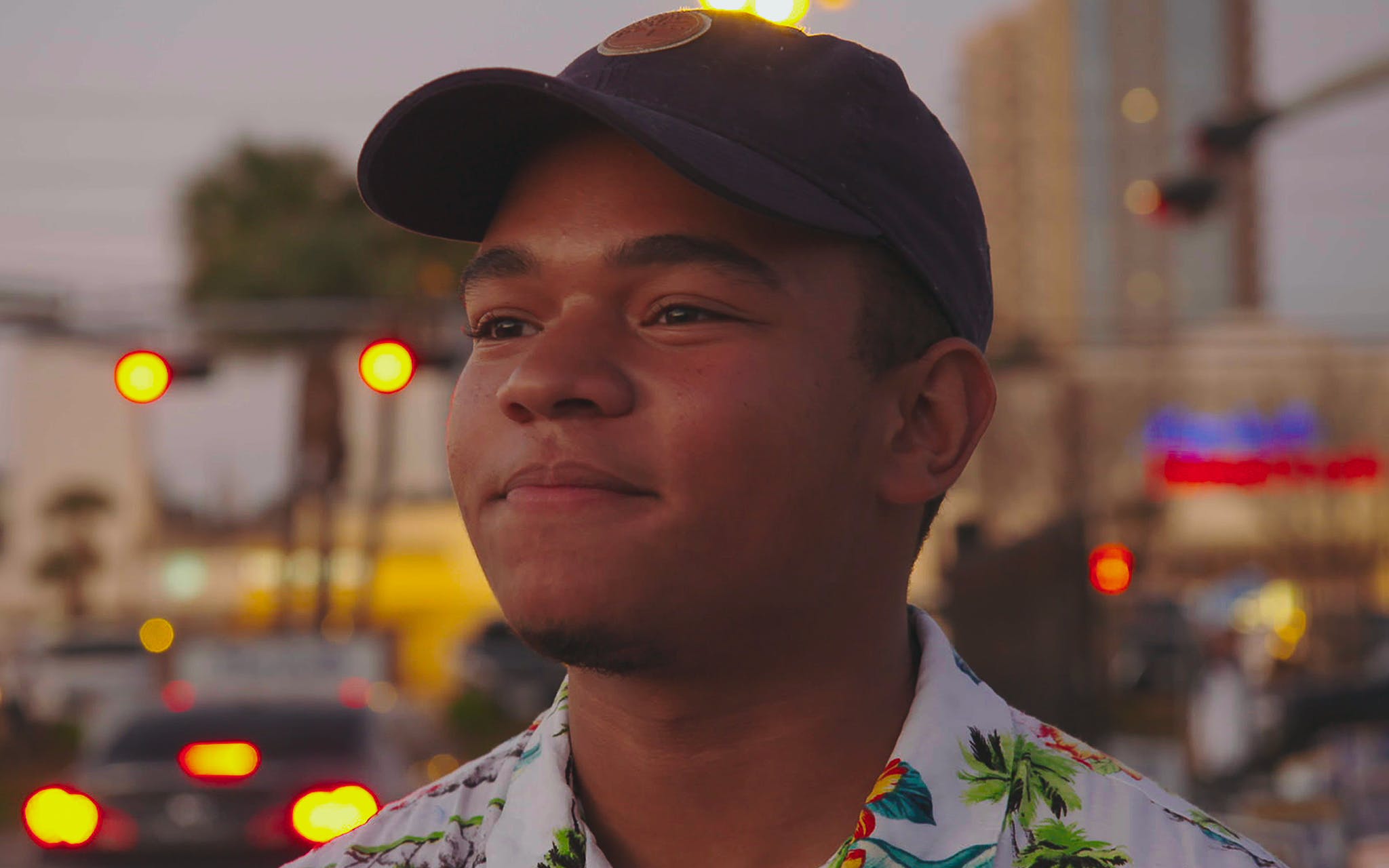 That last line comes after a painfully awkward door-knocking interaction, in which a middle-aged woman asks McClinton to describe his accomplishments. Instead of talking about his activism, he offers to google himself. “No!” she exclaims. The filmmakers’ inclusion of these missteps is crucial to keeping Ready or Not honest; the movie could easily have framed McClinton’s tale as merely “inspirational,” but that would’ve been a lot less interesting. And who among us wasn’t at least a little awkward at seventeen? McClinton deserves praise for putting himself out there, for gamely failing again and again, and for knocking on door after door. His campaign staff also deserves credit for putting up with him. We watch them become increasingly exasperated by the challenges of managing a teenage candidate. McClinton struggles to finish his final exams to make sure he can graduate on time, so he sometimes flakes on meetings. When a staffer points out that he really shouldn’t be spending $200 in campaign funds on an Uber ride from Houston to Austin, he counters that he didn’t have his driver’s license yet.

In the end, McClinton received 11 percent of the vote—just enough, when combined with the 21 percent for his competitor, Janaeya Carmouche, and Jose Carlos Gonzalez, at 19 percent, to force Kubosh into a runoff for the first time since he took office in 2014. His candidacy over, McClinton swallows his pride and stumps for Carmouche, knocking on doors and tabling for her. In the end, Kubosh is unsurprisingly reelected, but it still feels like a partial win, or at least a proof-of-concept demonstration that it might be time to start taking youth activists seriously. On climate change, gun violence, LGBTQ rights, and the fight for racial justice, they’re often years ahead of their adult counterparts.

After graduating from high school last year, McClinton took a gap year to continue his campaign into the fall. He’s since been working for the PeaceJam Foundation, a civic engagement nonprofit, and volunteering with political campaigns. The film ends with him filling out college applications online and selecting an admissions essay prompt to answer: “Recount a time when you faced a challenge, setback, or failure.” That must’ve been one hell of an essay.