“The 24th” — a World War I drama that captures one of the most tragic chapters in Jim Crow America, the Houston Riot of 1917 — opens Friday.

The film depicts the aftermath of incidents of harassment and beatings by locals and Houston police officers during that era, and the all-Black Army infantry regiment that mutinied and marched on Houston.

By nightfall on Aug. 23, some 21 people had died, including 11 civilians. After the trial, 19 of the soldiers were hung, and 41 were sentenced to life imprisonment. 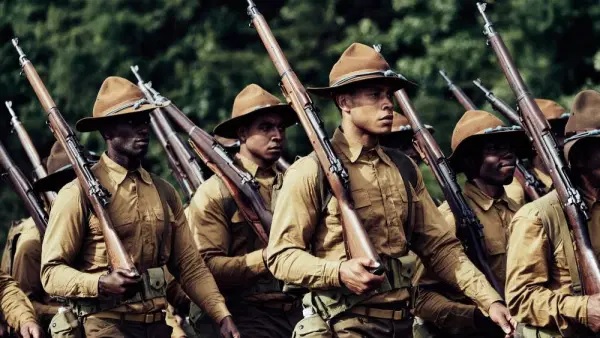 Houston Public Media spoke to the film’s director, Academy-award winning filmmaker Kevin Willmott, about what led him to this story and why he’s calling the film “a hidden history” of America.

In that conversation, Willmott reminisces of a high school riot that he witnessed while growing up in Kansas. Referencing a quote from Dr. Martin Luther King, Jr. — in which he recites, “a riot is a language of the unheard” — Willmott talks about how his friends, during this high school riot, exploded, because of the “unheard grievances” that they all experienced and how they were treated as Black students at the school.

“When you push down people for so long,” Willmott said, “eventually they’ll rise up. And the problem is that when they rise up, there’s no rhyme or reason to it.”

He compared those incidents to looters and rioters who vandalize and set fires in their own neighborhoods during violent protests.

“By the time you break, there’s no logic to it,” Wilmott added. “I have a saying: ‘We don’t own history, history owns us.’”

“The 24th” is a digital release from New Slate Ventures and is available through video on demand and digital platforms by Vertical Entertainment. The film stars Trai Byers, Bashir Salahuddin, Aja Naomi King, Mo McRae, Tosin Morohunfola, Mykelti Williamson and Thomas Haden Church. You can view the film’s trailer below.