The board of elections for a rural Georgia county that is mostly Black is proposing to close most of the county’s polling locations ahead of the crucial, nationwide midterm elections, Newsweek and other news organizations report.

The proposed move could have an effect on the race involving Democrat Stacey Abrams, the first Black woman gubernatorial nominee, critics say.

The reason for the possible closure? Because the sites are not equipped for people with disabilities, Randolph County, Ga., officials claim.

On Thursday night, the Randolph County Board of Elections informed residents about possibly shutting down seven of nine voting locations because county officials did not have time to make them accessible to wheelchairs ahead of the balloting, according to news organizations. The polling locations are not in compliance with the Americans with Disabilities Act.

Randolph County is a rural place on the Georgia-Alabama border that has 7,000 residents, 61% of them Black, according to Newsweek. One of the sites that county officials are proposing be closed serves a population of registered voters that is 96% Black.

The American Civil Liberties Union is crying foul, citing the Abrams race and the fact that the seven polling locations in question were used in voting earlier this year.

“We have expected high turnout this fall,” Newsweek reports that ACLU Georgia said in a letter. “You have to ask, why were these polling places enough for the primary and runoff earlier this year, but not good enough for this November’s election?”

The letter continued, “The timing is very suspicious.”

Newsweek points out that Abrams’ opponent is Republican Brian Kemp, Georgia Secretary of State and the state’s top election official. Kemp, however, says he opposes the closure of the sites.

“As soon as we learned about this proposal, we immediately contacted Randolph County to gather more information,” Newsweek quoted Kemp as saying through a spokeswoman. “Although state law gives localities broad authority in setting precinct boundaries and polling locations, we strongly urged local officials to abandon this effort and focus on preparing for a secure, accessible and fair election for voters this November.”

County officials will vote on the proposed closures on Aug. 24. 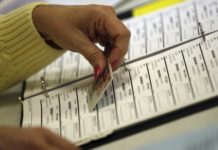 NAACP speaks on the myth of voter fraud