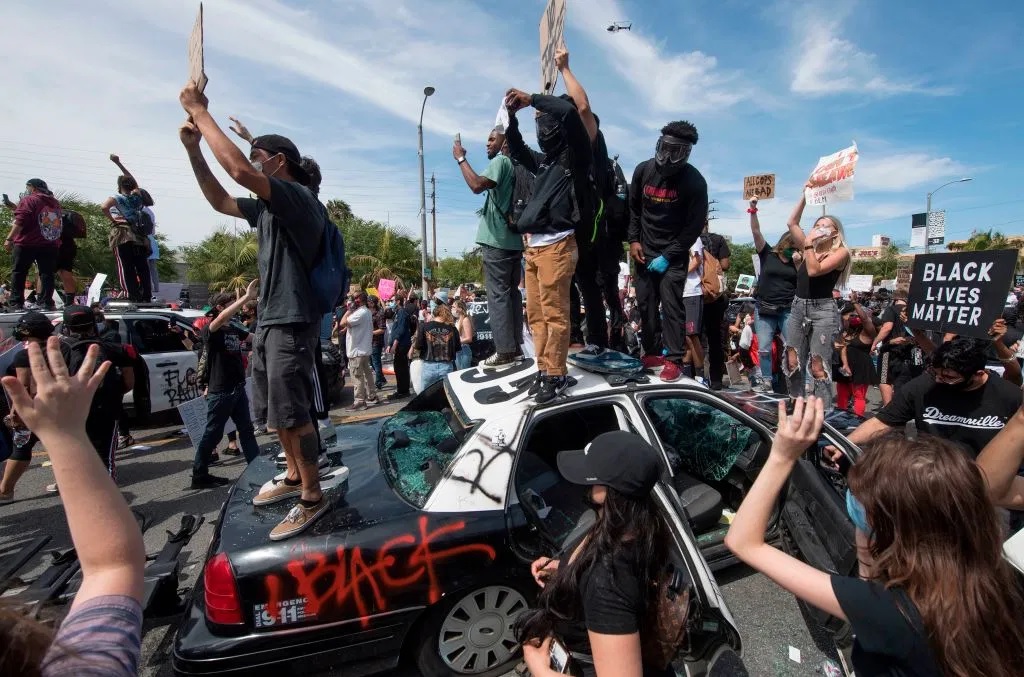 After six straight days of unrest, America headed into a new work week Monday with neighborhoods in shambles, urban streets on lockdown and political leaders struggling to control the coast-to-coast outpouring of rage over police killings of black people.

Despite curfews in big cities across the U.S. and the deployment of thousands of National Guard soldiers over the past week, demonstrations descended into violence again on Sunday.

Protesters hurled rocks and Molotov cocktails at police in Philadelphia, set a fire near the White House and were hit with tear gas and pepper spray in Austin, Texas, and other cities. Seven Boston police officers were hospitalized.

This is important to hear the voices. When you listen to the voices of the #GeorgeFloydProtests you hear truth to power.pic.twitter.com/FJB536MeBb

Police officers and National Guard soldiers enforcing a curfew in Louisville, Kentucky, killed a man early Monday when they returned fire after someone in a large group shot at them first, police said. In Indianapolis, two people were reported dead in bursts of downtown violence over the weekend, adding to deaths recorded in Detroit and Minneapolis.

In some cities, thieves smashed their way into stores and ran off with as much as they could carry, leaving shop owners, many of them just beginning to reopen their businesses after the coronavirus shutdowns, to clean up their shattered stores.

In other places, police tried to calm tensions by kneeling in solidarity with demonstrators.

The demonstrations were sparked by the death of George Floyd, a handcuffed black man who pleaded for air as a white Minneapolis police officer pressed his knee against Floyd’s neck for several minutes.

Racial tensions were also running high after two white men were arrested in May in the February shooting death of black jogger Ahmaud Arbery in Georgia, and after Louisville, Kentucky, police shot Breonna Taylor to death in her home in March.

The upheaval has unfolded amid the gloom and economic ruin caused by the coronavirus, which has killed over 100,000 Americans and sent unemployment soaring to levels not seen since the Depression. The outbreak has hit minorities especially hard, not just in infections and deaths but in job losses and economic stress.

Three generations debating the same issue, the same problem, that is still at the forefront of issues amongst black people. pic.twitter.com/HsOP46mkyG

The scale of the coast-to-coast protests has rivaled the historic demonstrations of the civil rights and Vietnam War eras. At least 4,400 people have been arrested for such offenses as stealing, blocking highways and breaking curfew, according to a count compiled by The Associated Press.

“They keep killing our people. I’m so sick and tired of it,” said Mahira Louis, 15, who was at a Boston protest with her mother Sunday, leading chants of “George Floyd, say his name!”

At the White House, the scene of three days of demonstrations, police fired tear gas and stun grenades Sunday into a crowd of more than 1,000 chanting protesters across the street in Lafayette Park.

The crowd ran, piling up road signs and plastic barriers to light a raging fire in a street nearby. Some pulled an American flag from a building and threw it into the flames. A building in the park with bathrooms and a maintenance office was burned down.

The district’s entire National Guard — roughly 1,700 soldiers — was called in to help control the protests, according to Pentagon officials.

Former Vice President Joe Biden, the Democratic presidential candidate, visited the site of protests in his hometown of Wilmington, Delaware, and talked to demonstrators. He also wrote a post online expressing empathy for those despairing about Floyd’s killing.

In Salt Lake City, an activist leader condemned the destruction of property but said broken buildings shouldn’t be mourned on the same level as black men like Floyd.

“Maybe this country will get the memo that we are sick of police murdering unarmed black men,” said Lex Scott, founder of Black Lives Matter Utah. “Maybe the next time a white police officer decides to pull the trigger, he will picture cities burning.”

Thousands marched peacefully in Phoenix; Albuquerque, New Mexico; and other cities, with some calling for an end to the fires, vandalism and theft, saying the destruction weakens calls for justice and reform.

In downtown Atlanta, authorities fired tear gas to disperse hundreds of demonstrators. Mayor Keisha Lance Bottoms said t wo officers had been fired and three placed on desk duty after video showed police surrounding a car Saturday and using stun guns on the man and woman inside.

In Los Angeles, a police SUV accelerated into several protesters in a street, knocking two people to the ground. Nearby in Santa Monica, not far from a peaceful demonstration, groups broke into stores, walking out with boxes of shoes and folding chairs, among other items. A fire broke out at a restaurant across the street. Scores of people swarmed into stores in Long Beach. Some hauled armloads of clothing from a Forever 21 store away in garbage bags.

The LAPD beating protesters with batons and shooting rubber bullets directly into the crowd. It’s BAD in Los Angeles. You can see the girl with the black top get injured… This started as a #BlackLivesMatter peaceful protest. UNREAL. #LosAngelesRiots #GeorgeFloyd pic.twitter.com/iAbwUGNQFW

In Minneapolis, the officer who pinned Floyd to the pavement has been charged with murder, but protesters are demanding the three other officers at the scene be prosecuted. All four were fired.

“We’re not done,” said Darnella Wade, an organizer for Black Lives Matter in neighboring St. Paul, where thousands gathered peacefully in front of the state Capitol. “They sent us the military, and we only asked them for arrests.”

Minnesota Gov. Tim Walz brought in thousands of National Guard soldiers on Saturday to help quell violence that had damaged or destroyed hundreds of buildings in Minneapolis over days of protests.

That appeared to help minimize unrest, but thousands marching on a closed freeway were shaken when a tractor-trailer rolled into their midst. No serious injuries were reported. The driver was arrested on suspicion of assault.