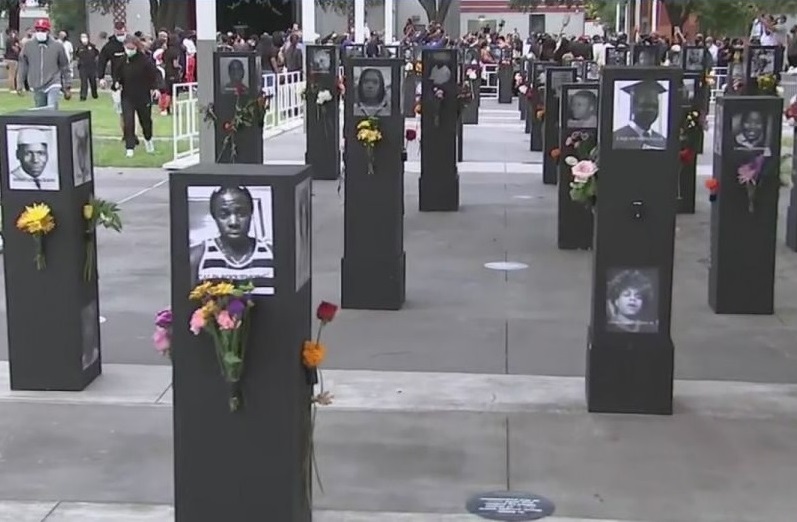 A new art exhibit has made its way to Houston and can now be viewed in the Third Ward.

The Say Their Names Memorial— honors Black Americans whose lives have been lost due to social injustice.

A kickoff event was held Monday evening, in which Houston Mayor, Sylvester Turner, Congresswoman Sheila Jackson Lee were in attendance to speak including Trae Tha Truth.

“You simply cannot take that walk without feeling their spirit and in so many ways they are very much alive,” said Turner.

As part of the memorial, there are around 230 photos displayed … all of them no longer alive. Names such as Atatiana Jefferson, Sandra Bland, and George Floyd.

The point is to “say their name”, maybe learn a little about them or spark a conversation.

For the mother of Botham Jean, the 26-year-old African American man who was killed in his apartment by an off Dallas police officer Amber Guyger back in 2018, the memorial touches home.

“Botham never deserved to die that way. We are still trying after two years to come to grip with the pain and the grief of his loss,” said Allison Jean, Botham’s mother.

The memorial comes by way of Portland Oregon, a small part of the social injustice movement that has swept the nation.

A sincere thank you to @traeabn for bringing the @saytheirnamesmemorial to Houston and continuing to fight tirelessly against injustice across the country. We are honored to have the memorial hosted at the @epconservancy. It will be open to the public tomorrow, September 29th through October 6th from 10:00 am to 7:00 pm daily. If you’d like to volunteer for the memorial, which is free to the public, visit @reliefgang for more information. #saytheirnamesmemorial #houston #blacklivesmatter

But according to a recent report by the Pew Research Center, participation in these protests and movement are declining.

A notion that Trae Tha Truth says won’t stop him from continuing his work.

“I believe you have to show people the reality of a situation and I think that this is something that needs to be seen.. even for those who may not be impacted, if they come here they may feel a little love and compassion,” said Trae.

The exhibit will open to the public in Emancipation Park Tuesday at 10 a.m. and will go through October 13.

For more information, go to www.saytheirnamesmemorials.com.