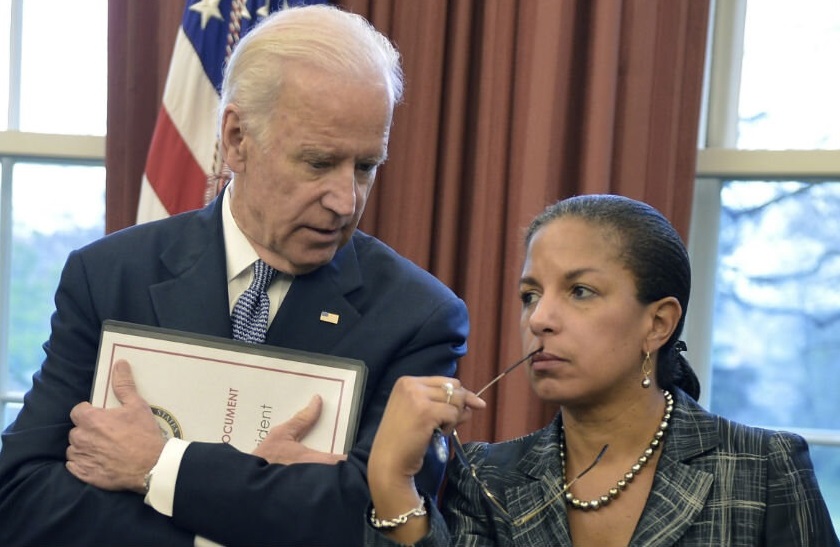 Sens. Kamala Harris (D-Calif.) and Elizabeth Warren (D-Mass.) are getting most of the buzz, but former U.S. Ambassador to the United Nations Susan Rice is also getting a lot of attention in Joe Biden’s campaign as he considers who to pick as his running mate, sources say.

Rice, who also served as former President Obama’s national security adviser, has seen her stock rise amid a series of crises, including the COVID-19 pandemic.

“I know she’s very much in the mix,” a source close to the Biden campaign said.

One factor to watch is Biden’s relationship with Rice. The two worked closely in the Obama administration, and personal chemistry is an underrated factor in vice presidential decisions.

“I know they have a good relationship — perhaps the best relationship of anyone on the list,” the source close to the Biden campaign said. “They’ve known each other for years, they’ve worked alongside each other and she’s been tested in a way that a lot of folks on the list just haven’t been.”

Biden, who has committed to selecting a woman as his running mate, has said repeatedly that he is looking for someone who is “ready to be president on day one.”

He is also under pressure by some Democrats to pick a woman of color after the death of George Floyd and the demonstrations that followed urging an end to systemic racism.

Harris has widely been seen as the favorite, but sources said Rice should not be counted out.

“Everyone automatically thinks of Kamala when they think he needs to pick a woman of color. It’s become conventional wisdom,” said a source who worked in the Obama administration alongside Biden and Rice. “But if you look at Susan’s credentials, she makes perfect sense. She’s a rock star who has the confidence, stature and gravitas to be vice president.”

In an interview with Norah O’Donnell of CBS last month, Biden said he wants a partner in the White House who is “simpatico.”

“It’s really important that whomever you pick as a vice president agrees with you in terms of your philosophy of government and agrees with you on the systemic things that you want to change,” Biden said to O’Donnell.

Those close to Rice say she more than meets the job qualifications.

“I have never worked with anyone who is more skilled at rallying all parts of government into action and bringing people with diverse views together to tackle thorny problems,” Ambassador Brooke Anderson, who served as Rice’s chief of staff at the United Nations, said in an interview.

“She’s incredibly smart and strategic,” Anderson continued. “It’s not enough to have good ideas. You also need to have an understanding about how you get things done. She combines both and has deep experience in both.”

Some Democrats have wondered privately if it hurts Rice’s chances that she has never run for political office, as Harris and Warren have. Biden is also considering other elected Democratic officials, including Rep. Val Demings (Fla.), Sen. Tammy Duckworth (Ill.) and Atlanta Mayor Keisha Lance Bottoms.

Rice associates counter that her extensive resume speaks for itself. They also note that she has significant experience on presidential campaigns dating back to her time as a staffer on Michael Dukakis’s 1988 presidential campaign. She also served on John Kerry’s 2004 White House campaign as a senior foreign policy adviser and went on to serve on the Obama campaign as a policy adviser and top surrogate.

“We’re at a time when people are looking for leaders who bring vision, skill and energy to solving problems, and that’s her strength,” Anderson said. “And that is perhaps more compelling today than someone who has a long track record running for office.”

The time Biden and Rice shared in the Obama administration also carries some weight.

Rice wouldn’t confirm or deny that she is “in talks with the Biden campaign” during an interview with MSNBC’s Rachel Maddow this week.

“To the extent that it is reported that I am under consideration in a serious way for the vice president slot, let me just say that I’m extremely humbled and honored to be talked about in the context of so many extraordinary women,” she said.

“All I care about is getting Joe Biden elected president of the United States so that we again have competent, compassionate, loyal, effective leadership in the White House,” Rice added.

Biden’s campaign has not weighed in on who exactly is on his shortlist. Biden said this week he is considering a number of women of color, and that Latinas and Asian women are in consideration.

“There’s nobody who understands what the job of vice president entails more than a former vice president. There’s nobody who knows a job candidate’s abilities better than a former boss,” said Philippe Reines, a longtime adviser to Hillary Clinton who served in the State Department while Rice was the U.N. ambassador. “So if Joe Biden is considering Susan Rice as his running mate, he knows what he’s doing.”

Some Democrats fear that selecting Rice would awaken the Republican talking points on the attack on the U.S. consulate in Benghazi, Libya.

At the time, the former U.N. ambassador appeared on a round of Sunday shows and said the attack on the consulate was the result of a protest that turned violent instead of a planned terrorist attack. The administration later concluded it was a terrorist attack.

For years, Republicans used the attack against Clinton, Rice and Obama, who was running for reelection at the time.

Having Rice on the ticket — or even as a nominee as secretary of State, as some predict — would unearth the attacks.

But Democrats say that the attacks won’t matter.

“The Republicans are all about shredding an opponent’s good name,” Reines said. “With Susan, they have an eight-year head start with their favorite conspiracy theory of the 21st century. But it was baseless then and baseless now.”

The source close to the Biden campaign vouched for that: “Ambassador Rice has been through it. She knows what to expect. She gets it in a way that others do not.”