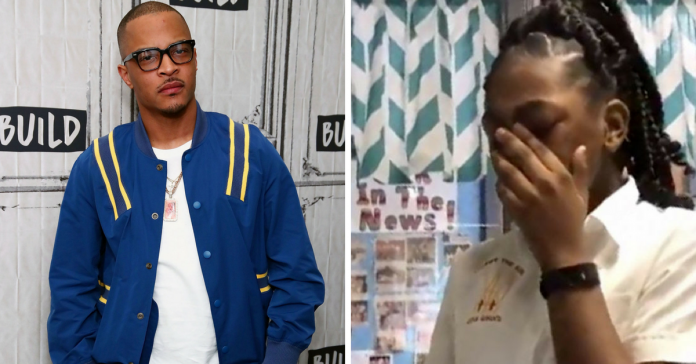 T.I. is speaking out against a private Catholic school in Louisiana that sent home an 11-year-old black girl this week because her braided hair violated a school rule against hair extensions.

The Atlanta rapper called out the officials at Christ The King School in Louisiana on his Instagram page Tuesday.

“You should be ashamed of yourselves…although I know you aren’t,” he captioned a video of the incident. The footage went viral. “This young lady is beautiful and her hair is perfectly fine,” he continued. “Unless of course, you have an issue with black people’s hair in generally [sic]? Or is it that you intended to publicly ostracize & humiliate these young ladies so they’d be ashamed of who they are and how they look…”

According to WDSU, the girl, Faith Fennidy, had worn her hair in thick braids with extensions to school on Monday, something she had done every day for the past two years. But over the summer, the school had changed their hair policy to prohibit “extensions, clip-ins or weaves” for the new school year.

Faith’s brother, Steven Evergreen Fennidy, recorded the video of his sister and his family leaving the school after they were told her hair was unacceptable. In the clip, the young girl’s hair is in a neat ponytail that would be acceptable by most standards.

She can be heard crying as the adults around her argue over her hair.

“Extensions make the hair easier to maintain,” Steven wrote on Facebook under the video which he later posted. “It allows my sister to have access to the swimming pool without having to get her hair re-done every night. How do you make a policy without even having a discussion? It’s because you don’t care and it’s just one more barrier to entry for black people.”

The superintendent for the Archdiocese of New Orleans’ Office of Catholic Schools, RaeNell Billiot Houston, defended the school’s decision in a statement saying that parents were notified of the new policy over the summer and before the school year begun.

“Furthermore, the school leadership worked with families as needed to ensure compliance,” he told NBC News.

“Your hair is beautiful. Your skin is beautiful. Your minds are beautiful. And not only that… you’re so undeniably beautiful & brilliant that you threaten anyone who tells you otherwise, to the point that they’re willing to stoop to levels as low as this to discourage you, so you’ll give up on your goals and never reach the levels of greatness they know await you. Please DONT LET THEM WIN!!!”

According to NOLA.com, Faith’s parents have chosen to withdraw her from the school. The family told WWL-TV they are meeting with a lawyer about filing a discrimination lawsuit.