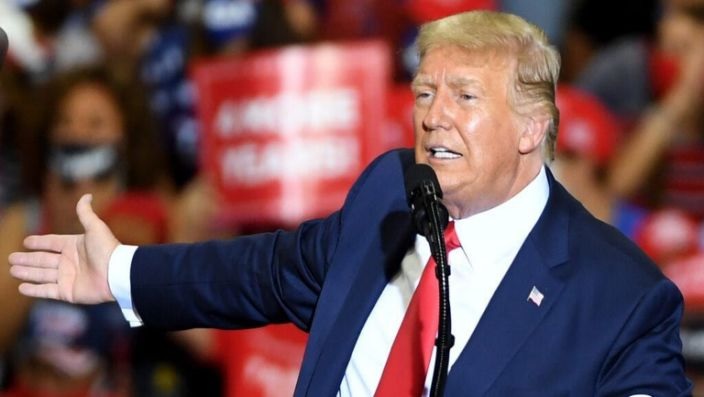 For over a year, President Donald Trump has been pushing for a third term in office in 2024. The incumbent, who is currently trailing his challenger, former Vice President Joe Biden, for the presidency, insisted again that he could “negotiate” a third term.

At a campaign event in Nevada on Saturday night, Trump proclaimed that he would “win Nevada,” a state that he lost in 2016 against Hillary Clinton. He declared that he would win four more years in the White House.

“And then after that,” he said, “we’ll negotiate, right? Because we’re probably—based on the way we were treated—we are probably entitled to another four after that.”

The 22nd Amendment to the U.S. Constitution was ratified in 1951 after President Franklin Delano Roosevelt was elected to the presidency four times. The amendment limited presidents to two terms in office. There are no provisions or reasons that a president would be able to negotiate.

Some media pundits have said that the president is “joking” about staying in office for the third time. However, Trump’s former “fixer,” lawyer Michael Cohen, told Don Lemon last week that “Donald Trump does not have a sense of humor.”

“(He) believes that he should be the ruler—the dictator of the United States of America,” Cohen contended on CNN Tonight with Don Lemon. “He actually is looking to change the Constitution.”

Cohen maintains that unlimited terms in office are one of the things Trump admires about autocrats like Kim Jong Un and Vladimir Putin.

“So I want you to understand that when he says 12 more years if he wins, he is going to automatically—day number one—start thinking about how to change the Constitution for a third term and then a fourth term,” Cohen said.

In order to change the 22nd Amendment, Trump would need an affirmative vote from two-thirds of the House of Representatives and two-thirds of the U.S. Senate, and given the opposition to his presidency, that is highly unlikely.