DefenderNetwork.com
Home NEWS National Trump says Lewis made ‘big mistake’ by not coming to his inauguration 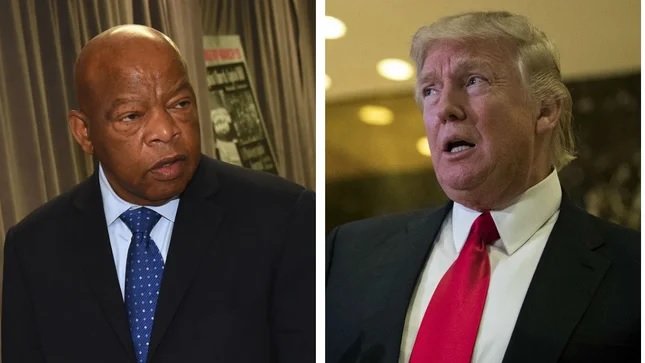 President Trump declined to say during a new interview whether he found the late Rep. John Lewis’s (D-Ga.) life “impressive,” adding that the longtime lawmaker and civil rights icon should have come to his inauguration.

When asked how he thinks history will remember Lewis, Trump told Jonathan Swan on “Axios on HBO”: “I don’t know. I don’t know John Lewis.”

“He chose not to come to my inauguration. I never met John Lewis, actually, I don’t believe,” Trump added.

.@jonathanvswan: “How do you think history will remember John Lewis?”

President Trump to #AxiosOnHBO: “I don’t know…I don’t know John Lewis. He chose not to come to my inauguration.” pic.twitter.com/LDv76rrIFc

The president said that he couldn’t “say one way or the other” whether he found Lewis’s life “impressive.”

“I find a lot of people impressive. I find many people not impressive,” Trump said during the interview, which aired late Monday.

“He didn’t come to my inauguration. He didn’t come to my State of the Union speeches, and that’s okay, that’s his right, and, again, nobody has done more for Black Americans than I have. He should have come. I think he made a big mistake,” Trump continued.

Lewis said that he did not believe Trump was a “legitimate president” at the time of the president’s inauguration, alleging that that “the Russians participated in helping this man get elected.”

The late Georgia lawmaker also skipped the president’s State of the Union addresses.

When pressed by Swan on whether or not he found Lewis’s story impressive, Trump responded that Lewis ” was a person that devoted a lot of energy and a lot of heart to civil rights, but there were many others also.”

Lewis, who died last month, became the first Black lawmaker in the nation’s history to lie in state in the Capitol.

He was one of the original Freedom Riders and the youngest speaker at the March on Washington in 1963.

Lewis was also beaten by an Alabama state trooper and his skull was fractured during the 1965 march across the Edmund Pettus Bridge that became known as “Bloody Sunday.”

Trump said in the interview he would have “no objection” to renaming the bridge after Lewis.

Support for renaming the bridge has spread in the wake of Lewis’s death. A petition on Change.org to rename the bridge has garnered over 535,000 signatures as of Tuesday morning.