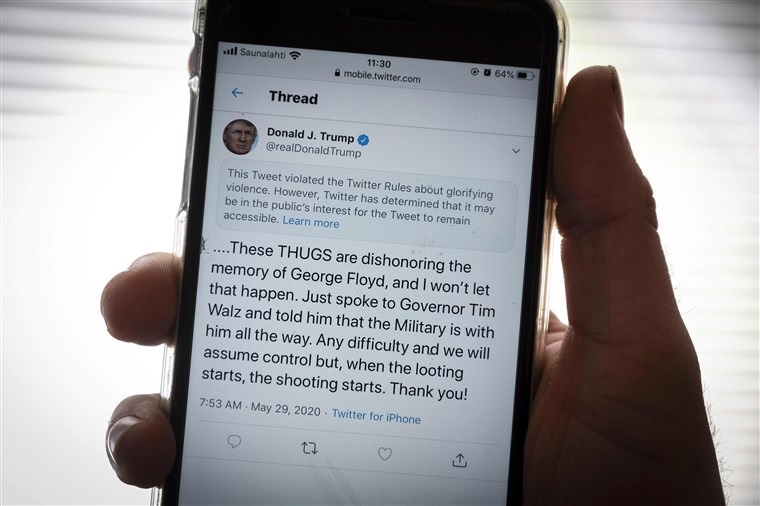 President Trump on Friday called protesters in Minneapolis “thugs” and vowed that “when the looting starts, the shooting starts.” He tweeted after protesters outraged by the death of a black man in police custody torched a police station.

Historically, the phrase was used by Miami’s police chief, Walter Headley, in 1967, when he addressed his department’s “crackdown on … slum hoodlums,” according to a United Press International article from the time.

Headley, who was chief of police in Miami for 20 years, said that law enforcement was going after “young hoodlums, from 15 to 21, who have taken advantage of the civil rights campaign. … We don’t mind being accused of police brutality.”

Miami hadn’t faced “racial disturbances and looting,” Headley added, because he let word filter down that “when the looting starts, the shooting starts.”

The phrase was considered to have contributed to the city’s race riots in the late 1960s, according to The Washington Post.

Headley, who died only a few months later in 1968 and had been denounced by civil rights leaders, was described in an Associated Press obituary as the “architect of a crime crackdown that sent police dogs and shotgun-toting patrolmen into Miami’s slums in force.”

The president’s language got more aggressive as violence boiled over in Minneapolis Thursday night. “These THUGS are dishonoring the memory of George Floyd, and I won’t let that happen,” he tweeted. “Just spoke to Governor Tim Walz and told him that the Military is with him all the way. Any difficulty and we will assume control but, when the looting starts, the shooting starts. Thank you!”

The Trump tweet and reaction from Twitter came after the president signed an executive order Thursday taking aim at the legal shield that protects social media companies from liability for content posted by users on their platforms. That happened after a first-ever fact check by Twitter on his tweets this week.

The quote the president tweeted — “when the looting starts, the shooting starts” — was said by former Miami Police Chief Walter Headley during a December 1967 news conference, according to The Washington Post.

Miami had a long history of aggressive policing. The Post said that quote was cited by a national commission as a contributing factor in rioting that broke out in the mostly black Liberty City section of Miami in August 1968.

An accompanying tweet from Mr. Trump sharply criticized Minneapolis Mayor Jacob Frey: “I can’t stand back & watch this happen to a great American City, Minneapolis. A total lack of leadership. Either the very weak Radical Left Mayor, Jacob Frey, get his act together and bring the City under control, or I will send in the National Guard & get the job done right…..”

The National Guard had already been called in at the time.

At an overnight news conference, Frey didn’t appear to be aware of the Trump tweets. He asked reporters to read them to him. As they did, he shook his head.

Then he said, the anger clearly audible in his voice, “Weakness is refusing to take responsibility for your own actions. Weakness is pointing your finger at somebody else during a time of crisis. Donald Trump knows nothing about the strength of Minneapolis. We are strong as hell. Is this a difficult time period? Yes. But you’d better be damned sure that we’re gonna get through this.”

Mr. Trump and his allies have been questioning an officer’s conduct and calling for justice for Floyd.

“This is the first race-tinged case that I’ve ever heard him address” as president, said the Rev. Al Sharpton, a civil rights activist and Trump critic who’s known the president for decades. “So therefore he cannot be upset when people feel that it’s empty words because it is so out of character.”

Mr. Trump has been silent on a number of high-profile police-involved killings, including that of Stephon Clark, a black man shot by Sacramento police in 2018.

“This is something that is a local matter and that’s something that we feel should be left up to the local authorities,” then-White House press secretary Sarah Huckabee Sanders said at the time.

He’s never addressed the 2014 death of Eric Garner, who was placed in a chokehold by police trying to arrest him for selling loose cigarettes.

But Mr. Trump’s in recent weeks as he has repeatedly expressed dismay at footage of the killing of Ahmaud Arbery, the 25-year-old black man fatally shot in February in Georgia while jogging.

“You know, my heart goes out to the parents and the family and the friends,” he told reporters this month. “It’s a heartbreaking thing.”

The president has notably left open the possibility of some other explanation, saying, “It could be something that we didn’t see on tape.”

Mr. Trump and his allies have been even clearer on the death of Floyd.