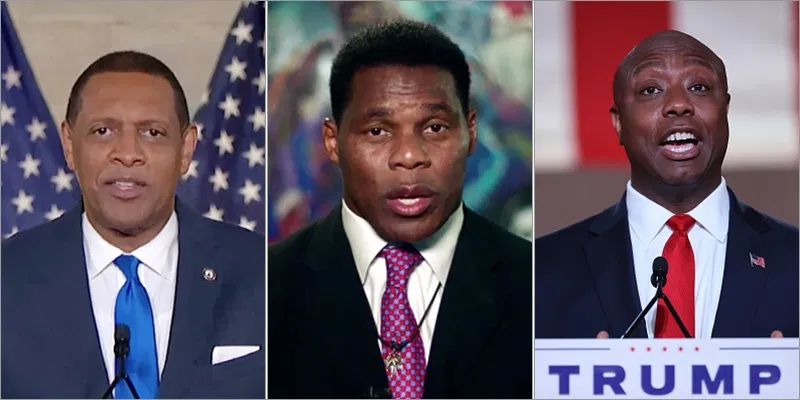 Whether through sheer coincidence — or not — “Uncle Tom” was one of the top trending topics on Twitter Tuesday morning following the opening night of the Republican National Convention (RNC) that featured several Black men making the case for Donald Trump to be re-elected.

More than 6,000 “Uncle Tom” tweets were posted following speeches from Democratic Georgia State Rep. Vernon Jones, former professional football star Herschel Walker and South Carolina Sen. Tim Scott. They each took turns trying to dispel any notion of racism in America or among its leadership despite Trump’s repeated personal demonstrations to the contrary.

Uncle Tom and his brother Tom. If you were a slave trying to escape slavery these are the two people that will rat you out to the slave owner. Running back and telling the Slave owner your plan to escape. pic.twitter.com/YrR53a7ajT

“The Democratic Party does not want Black people to leave their mental plantation,” Jones, who has been called an “embarrassment” to Democrats, said Monday night at the RNC. “We’ve been forced to be there for decades and generations. But I have news for Joe Biden: We are free. We are free people with free minds.”

Walker, who was one of Trump’s employees when he played in the USFL — another of Trump’s failed business ventures — said his “soul” was hurt when he learned people called the president racist.

“I take it as a personal insult that people think I would have a 37-year friendship with a racist,” Walker said Monday night with a straight face during his official endorsement of Trump’s re-election.

Racist on here saying not to call Herschel an Uncle Tom because that breaks the illusion of his tokenism. Lmaoo gn pic.twitter.com/4YmZzgwDTl

Not to be outdone, though, Scott, the sitting U.S. senator who has previously dared to broach the topic of race with his commander-in-chief, said that Trump gives citizens the best chance “to live the American dream.”

For brevity’s sake, here’s the Cliff’s Notes version of Trump’s treatment of Black people in America: a decades’ long streak of discrimination that pre-dates his White House stint; repeated attacks against Black women, in particular; and referring to white supremacists in part as “fine people.” The president is racist by the very definition of the word, making the speeches from Jones, Walker and Scott both predictable in the context of Black Republicans and disingenuous whether they truly believe the words they told America or not.

If that’s not proof enough, Vox created a whole comprehensive timeline of Trump’s racism for readers to refer to in case there is still any confusion.

To be clear, the term “Uncle Tom” comes from a fictional slave in the novel “Uncle Tom’s Cabin,” written by abolitionist Harriet Beecher Stowe in 1852. Over the years, the character became synonymous with subservient African Americans who sell out their people to curry favor with white folks.

Republicans on Twitter took it upon themselves to try to change the “Uncle Tom” narrative on social media Tuesday morning.

Uncle Tom is trending on Twitter because black & brown people rocked the Republican National Convention. The Left freak out when minorities don’t toe the line – they are the racists. @nikkihaley @senatortimscott @herschelwalker @kimkbaltimore @uncletomdoc #truthtalking pic.twitter.com/WnqNyvEeoV

You, the reader, can decide whether Jones, Walker and Scott fit the criteria for such a designation.

Prior to the RNC’s start, Scott was the only Black person who was listed on the convention’s official schedule of speakers. However, what might be more telling than the RNC’s overtures to Black voters was its invitations to people who have been accused of having a racist agenda.

That includes: Nick Sandmann, the MAGA hat-wearing teenager who found himself at the center of a racially charged confrontation with a Native American elder and Black Hebrew Israelites at the Lincoln Memorial in Washington, D.C., last year; and Mark and Patricia McCloskey, the married couple of lawyers who brandished and aimed guns at nonviolent Black Lives Matter protesters marching peacefully past their home in St. Louis in June.