DefenderNetwork.com
Home NEWS National Young voter to Biden: “Besides, ‘you ain’t Black,’ what do you have... 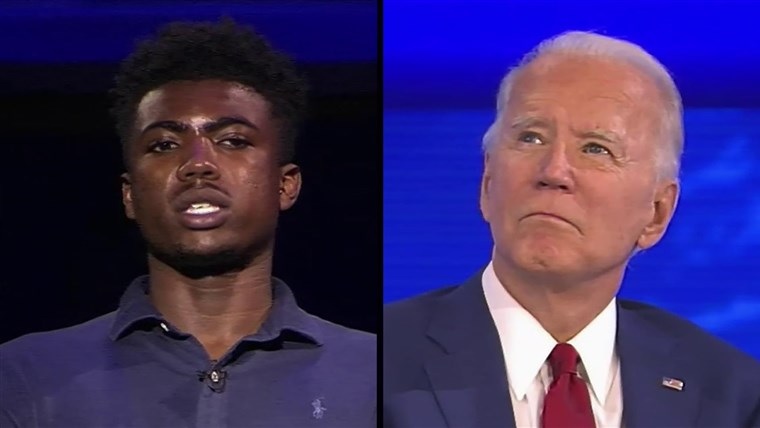 During Joe Biden’s town hall on Thursday night, a young Black progressive Democrat voter stood up to ask the Democratic presidential candidate about race. “Many people believe the true swing voters in this election will be Black voters under 30 – not because they’re voting for Trump, but because they won’t vote at all,” said Cedric Humphrey, a student from Harrisburg, Pennsylvania.

“One, as in addition to dealing with criminal justice system to make it fair and more decent, we have to be able to put Black Americans in a position to be able to gain wealth, generate wealth,” Biden said.

“I myself have had this exact same conflict,” Humphrey continued. “So my question for you is: Besides, ‘you ain’t Black, what do you have to say to young Black voters who see voting for you as further participation in a system that continually failed to protect them?”

Biden, who participated in a separate but competing town hall from President Trump that aired on a different network, replied with a quote by his “buddy, the late civil rights icon Congressman John Lewis. “It’s a sacred opportunity, the right to vote, to make a difference,” Biden said.

He continued: “If young Black women and men vote, you could determine the outcome of this election. Not a joke. You can do that.”

“And the next question is: Am I worthy of your vote, can I earn your vote,” Biden said. He said the answer is two things he’s demonstrated he has cared about.

“One, as in addition to dealing with criminal justice system to make it fair and more decent, we have to be able to put Black Americans in a position to be able to gain wealth, generate wealth,” Biden said.

Biden is asked “Besides ‘you ain’t Black,’ what do you have to say to young Black voters?” pic.twitter.com/BJvEXClg7F

He said that this entails early education which is why he supports increasing school funding from $15 to $45 billion. “That allows every teacher in that school to make up to $60,000 bucks. And the problem now is, they’re leaving the schools, they’re not there.” Biden said.

Aside from a teacher shortage, which leads to shortcomings in education, schools should also have social workers and school psychologists. He and the Obama administration also said provided more funding to HBCUs, guaranteed first-time homebuyers a $15,000 down payment, and helped young Black entrepreneurs get startup money.

Biden also said he would focus on stopping redlining, or the practice of refusing a loan or insurance to someone because they live in an area deemed to be a poor financial risk.

“That’s what got me involved in politics in the first place, a thing called redlining,” Biden said. “We can change so much that we can do so much to change the circumstances to give people a real opportunity.”

“We need to change that,” Biden said.

Thank you @donlemon for allowing me to speak on your show tonight! With 16 days until the election I hope everyone votes for @JoeBiden. However, when he wins we must remain critical of the leader and hold him accountable https://t.co/9BOnNii3Vi