The Houston Astros, under owner Jim Crane, have long been winners off the diamond before they became World Series champions.

Starting with the Community Leaders Program, which has positively affected more than 30,000 children in the Greater Houston area through baseball and softball programming, the Astros have been dominant in local neighborhoods.

The team once again demonstrated its commitment to the community by recently announcing plans to build the Bob Watson Education Center at the Astros Youth Academy at Sylvester Turner Park. The learning center will measure 6,000 square feet with classroom spaces to accommodate 75 to100 students.

“When you look the [academy], you can see a place where kids can go, be safe, have a good time and learn some things about life and baseball,” Jim Crane said. “You [Watson] set a lot of things up to open up doors and help other minorities succeed in the baseball world, which we’re continuing to work on. We appreciate your leadership. We’re honored to build this in your name.”

The Astros chose Watson to be the namesake behind the design because of his long baseball career which took him from player to coach to the front office. He played for 19 seasons, including parts of 14 seasons with the Astros from 1966-79.

After retiring as a player in 1984, Watson became a hitting coach, most notably for the 1988 AL Champion Oakland A’s. Following the 1988 season, he was hired by the Astros as assistant general manager.

He later took over as the club’s general manager following the 1993 season, becoming just the second African-American to hold the position in MLB history. Watson later became the first African-American GM to win a World Series after helping to guide the New York Yankees to the title in 1996.

“I am thoroughly honored and pleased to have my name associated with an educational center,” Watson said. “Education, you can’t take it from me, and education is our future, especially for the young people that here today.”

“These young people [will] have the opportunity to further their education in a safe environment. I’m just proud to be involved in it.”

Twila Carter, Astros senior vice president of community relations and the executive director of the Astros Foundation, explained how the education center will complement the academy.

“The baseball and softball facilities at the youth academy are already top notch,” Carter said. “We wanted to provide a classroom environment to match it. With the support from Jim Crane, we’ve taken a step toward that goal today.”

The education center will be used for various initiatives, including ACT and SAT prep and college application assistance for high school students, as well as adult programming. The center will also offer a classroom environment for baseball and softball instruction.

“My hats off to you Bob,” said Mayor Sylvester Turner. “I tell everybody, education is the key.

Turner added that the center is building character and individuals.

“More than 22 people last year received scholarships. It does make a huge, huge difference,” he said. 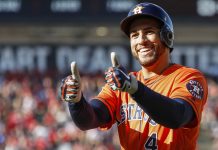 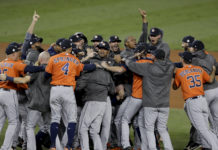 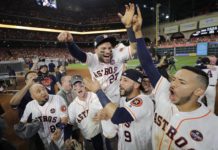 Astros close out the Yankees, head to the World Series