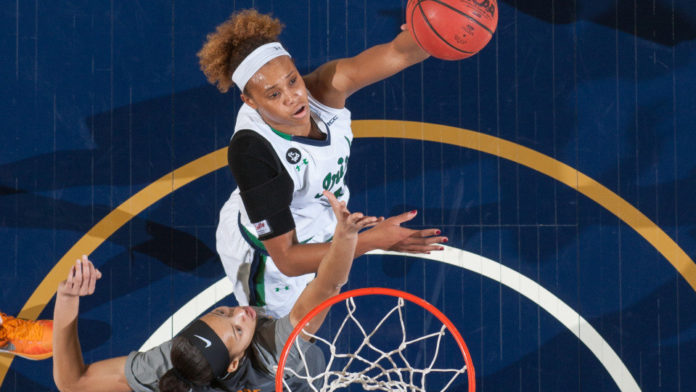 The Notre Dame Fighting Irish Women’s basketball team makes a rare appearance in Houston November 22 against the University of Louisiana Lafayette. One of the nation’s premier programs, the Irish were 33-2 last season and won both the ACC regular season and tournament championship for the third year in a row. The Notre Dame visit gives former Manvel (Texas) superstar Brianna Turner an opportunity to come home and play in the city that made her famous.

In two seasons at Notre Dame, Turner has become one of the nation’s top performers. She earned All-America honors as a sophomore in 2016 and was named the ACC’s Defensive Player of the Year. Brianna has ranked among the national leaders in field goal percentage each of her two years. Turner, already a strong low-post defensive force has also worked tirelessly on extending her shooting range over the offseason as a part of her rehabilitation from offseason shoulder surgery.

Preparing to begin her Jr. season, Turner has set lofty goals for the team and herself.

“We want to go undefeated for the season,” Turner shared. “We want to really focus on the small details this year. Whether it’s getting every box out or going in for offense boards, we want to focus and play hard for 40 minutes, play a complete game, not just half of a game. Personally I just want to play hard, leave it all on the floor and don’t walk off the floor with any regrets.”

She certainly has had no regrets about her decision to attend Notre Dame. With the opportunity to attend any school in the country, Turner got the right “feel” in South Bend.

“I visited a lot of schools. I came up on a visit here (ND) and I just knew. I kind of had that feeling that this was the school for me,” Brianna recalled. “From the staff, to the players, to the entire environment, it was just where I could see myself for 4 years. I really enjoy it here and I’m glad I made the decision to come here.”

Brianna Turner is the latest in a lineage of great women’s basketball players to hail from the Houston area. From players like Brittney Griner, Nneka Ogwumike and even old school legends like Monica Lamb, H-Town has long been a hotbed of high profile lady ballers. Turner offers her opinion.

“I think because the Houston area is so large with a wide pool of great girl basketball players,” Turner opined. “The combination of public and private schools with so much talent in such a wide area. You’ve got a lot of girls playing summer basketball and AAU, always trying to get better. I like looking up to Nneka. I’m sure there’s some girls looking up to me. The Houston area is so competitive with the games it’s really exciting to see who comes out next.”

“I first heard of Brianna when she was in 8th or 9th grade,” Gardner recalled. “Basketball folks I trust told me she was next great talent to hail from this area. They were correct.”

“Brianna has proved worthy of the accolades,” Gardner continued. “Brianna Turner can do a bit of everything on the basketball court. Offense and defense. She’s battled injuries at Notre Dame; but, her skillset is exceptional. Her presence on the court, especially on defense, makes ND a definite contender to reach the 2017 Final Four in Dallas.”

It goes without saying that Brianna is happy to be coming home to play in front of family and friends.

“I’m really excited,” Turner acknowledged. “My parents come to a lot of games here but not a lot of my extended family can make it out to games. I’m really excited to have my friends and family be able to come watch me play in college live.

Turner and the Irish will entertain Louisiana Lafayette at the Campbell Center Tuesday, November 22nd.