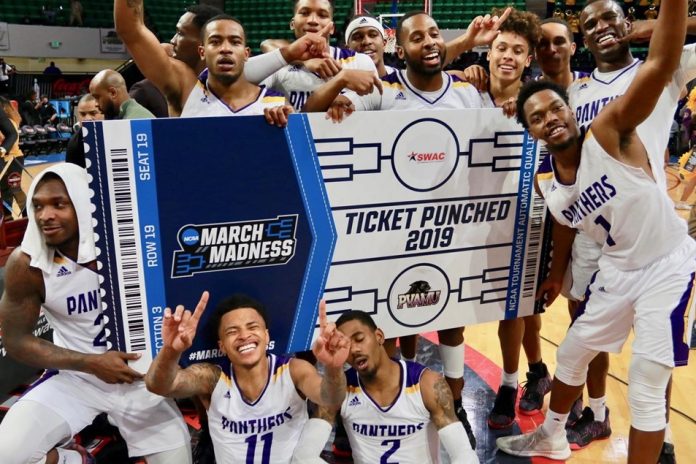 Three area universities are preparing for the Big Dance, better known as March Madness. Prairie View A&M University, Rice University and the University of Houston have all received their invitations.

The Panthers were literally unstoppable once SWAC competition began. They finished with an impressive 17-1 record and blew through the SWAC tournament like a runaway train. PVAMU was able to avenge their only conference loss in the tournament championship game by defeating arch-rival Texas Southern University 92-86.

Panthers Dennis Jones, Devonte Patterson and Gary Blackston were all named to the All- Tournament team. Blackston was named the tourney MVP.

Second-year head coach Byron Smith was understandably emotional as the Panthers cut down the nets.

“This was truly a remarkable night and I am so proud of this team and the accomplishment we made tonight,” Smith said. “All I can do is thank the Man upstairs for making this happen. We had a rough but the ending is a fairy tale within itself.”

“I can’t put into words just how proud and happy I am for our student athletes and our coaching staff,” Washington said. “They were special tonight and part of an amazing game to watch…”

The No. 24-ranked Rice Owl women capped off a perfect Conference USA season (16-0, 28-3 overall) in route to a 69-54 victory over Middle Tennessee in the C-USA tourney championship. As a result, the Owls earned their third NCAA Tournament berth and school-record 21st straight win.

Sophomore center and C-USA Defensive Player of the Year Nancy Mulkeyled the way with a game-high 24 points on 9-of-20 shooting and broke the title game record with eight blocks in 34 minutes of action. Mulkey was named the C-USA Championship MVP after averaging 18 points and 5.7 blocked shots. Teammate junior guard and C-USA Player of the Year Erica Ogwumikewas also named an All-Tournament performer.

“We’re really proud to do this for Rice,” head coach Tina Langleysaid. “We’re a nationally and universally respected university. We wanted to help the basketball program to be as respected as the university is, led by a great president.”

The ninth-ranked Houston Cougars, American Athletic Conference regular season champions (31-3 overall), were defeated by Cincinnati in the AAC tournament finals 69-57. The loss was a mere speed bump for the Cougars who will enter the dance as a No. 3 seed in the Midwest regional. It’s the second straight season and the 21st time in school history, the University of Houston Men’s Basketball has been selected to compete in the NCAA Tournament.

“For us to go from where we were five years ago to a No. 3 seed is monumental and rewarding,” Cougar head coach Kelvin Sampson said.

The Cougars are ranked in the top 25 in both offensive and defensive efficiency and most sports experts believe this is the year Houston advances to the Sweet 16.