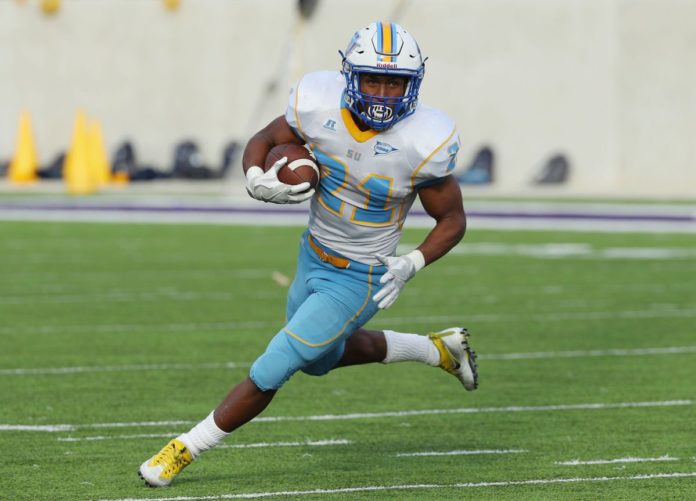 The Toyota SWAC football championship game is right around the corner, December 3rd at NRG Stadium. With two weeks remaining in the season and almost three months of football completed, the race to NRG has never been tighter. One division has clinched and another one appears headed to a showdown in New Orleans Thanksgiving weekend.

Never mind a change in head coaches, the Alcorn State Braves (4-4 in conference) are on a roll. Alcorn legend Fred “Air” McNair succeeds Jay Hopson at the top spot and the two-time SWAC champions are once again the SWAC East Division champs. Since the championship game’s inception, Alcorn is the second team (1999-2001 Grambling State) to make three straight trips to the championship game.

The Braves demolition of Mississippi Valley, 61-7 last weekend coupled with a Jackson State loss to Alabama A&M 27-20, punched the Braves ticket back to NRG. Alcorn QB Lenorris Footman when healthy, is a dangerous threat running or passing the ball. He’s got a host of talented playmakers that make the Braves an explosive team offensively.

Beseeched by injuries all season, Alcorn closes the regular season out against Jackson State. They will have two weeks to mend before the championship game.

In the West, predictably, defending West Champs Grambling and rival Southern are tied at the top spot with perfect 7-0 records in conference play. Both teams have one game remaining before they face each other Thanksgiving weekend in the Bayou Classic. Grambling faces Texas Southern this week in a pre-Classic tune-up, while Southern takes on Mississippi Valley.

The Southern Jaguars, 7-2 overall, are three years removed from wearing the Conference crown. Head coach Dawson Odums’ Jags are the total package. They boast the leading rusher in conference history, Lenard Tillery. How good is Tillery? He rushed for 245 yards on 29 carries recently against Prairie View. Quarterback Austin Howard is #2 in the SWAC in passing yardage and passing efficiency. Receiver Willie Quinn is second in the conference in receiving.

On defense the Jags are a physical unit. Aaron Tiller, Kentavious Preston and Roshaud Turner are the backbone of a defense that has a bend, but not break attitude.

The Grambling Tigers have been nothing short of dominant all season long. Head coach Broderick Fobbs’, defending West Division champs, lead the conference in total offense and defense. They average 42.6 points per game. They give up a mere 13.2 points.

The Tigers boast a prolific offense lead by quarterback Devante Kincade. Kincade is the conference leader in passing yardage and passing efficiency with 24 TD’s against two interceptions. Chad Williams is the leading receiver in the SWAC, averaging an astounding 136 yards per game. Running back Jestin Kelly is an experienced back who simply keeps the chains moving.

After a long grueling season, two teams that are extremely familiar with each other will face off to earn the right to travel to Houston’s NRG and face Alcorn State for the SWAC football championship. It will unfold right before our eyes and I, for one, hardly wait.

The Bayou Classic, November 26th at the New Orleans Superdome will determine the West Division title.