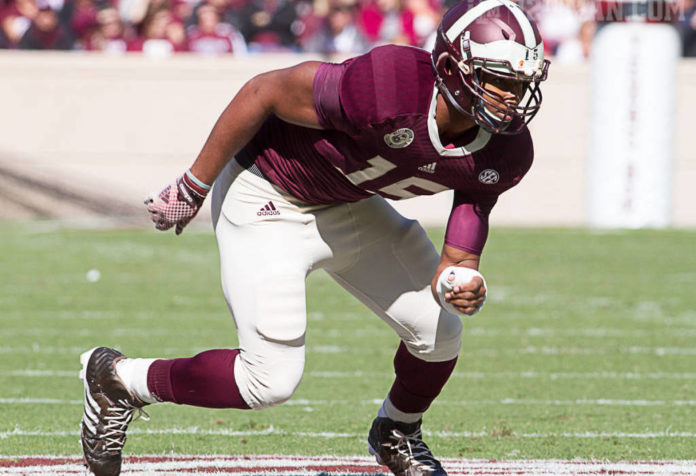 The annual NFL draft begins on April 27. Across the league, personnel departments from the 32 NFL teams are making their list and checking it twice to determine the players they feel can enhance the future of their franchises.

One thing that all 32 teams agree on is Texas A&M University defensive end Myles Garrett is the top player in this year’s draft.

There are two constants in the NFL: It’s a quarterback-driven league and there’s a premium placed on good defenders who can put extreme pressure on QBs and reduce them to a pile of rubble. Garrett fits into the latter category.

At 6-foot-4, 272 pounds, Garrett is a physical specimen. He finished in the top five in every drill for defensive linemen at the NFL Scouting Combine in Indianapolis. Most impressive was his 41-inch vertical jump, his strength, lifting 225 lbs. 33 times and 4.64-second 40-yard dash at 272 pounds.

A native of Arlington, Texas, Garrett grew up a Cowboys fan, but realizes that he doesn’t have a say-so in where he will play professionally.

“I have to be prepared for wherever I go,” Garrett said. “If it’s the Browns [holders of the No. 1 pick], I’m going up against one of the best tackles in the league [Joe Thomas] right away. No matter where I go, I’m going to be facing many other great tackles and great players. I have to be on my toes and keep my sword sharpened, ready to go.”

“I played against him for three years. He’s a great player,” Robinson said. “It’s obvious what he can do. His size. His length. His explosion. You put all that into one package, and it just calls for a great defensive end and a great football player.

“It never seemed like he took a play off to me,” Robinson said. “He always had a high motor, and that’s another attribute of his skill set that makes him so good. He’s always going 100 mph.”

Although some detractors have suggested Garrett could have been even more productive with his talent, Aggie head coach Kevin Sumlin set the record straight.

“He loves the game,” Sumlin said. “As great f an athlete as he is, he’s an even better competitor and even better teammate. He wasn’t 100 percent at times, but he was still very effective.

“That said a lot to his teammates about who he is,” Sumlin said. “That said a lot to our fans, but I think it also said a lot to GMs and people at the next level. He was really hurt, but to play and not shut it down and say, ‘Hey, I can just wait for the draft,’ says a lot about what type of player he is.”

As dominant as Garrett has been on the gridiron, his life away from football is just as interesting. Considered by many who know him as a young man with an old soul, Garrett is an avid fan of old-school music, particularly the group Journey. His interests range from poetry by Maya Angelou to paleontology. Leaving A&M after his junior year, he is 36 hours away from a degree in architecture.

He is a superior athlete with equal parts brains and brawn, and even that moniker doesn’t do him justice.