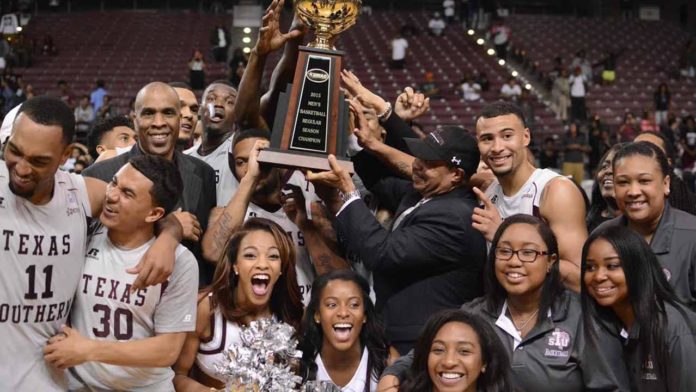 For the 4th time in 5 years, Coach Mike Davis and the TSU Men’s basketball team are the Kings of the SWAC Mountain. The Tigers defeated the Alcorn State Braves 94-88 in overtime on the campus at TSU, Thursday night.

It what was a schedule maker’s dream, #1 TSU facing off against #2 Alcorn, with the conference’s #1 seed for the upcoming post-season tournament on the line. Predictably the game featured a contrast of styles. Alcorn, with a robust, physical, pounding attack vs the TSU perimeter, slashing and dash attack.

The game was a classic seesaw affair that resembled a heavyweight fight, each team coming back bravely after being knocked to the canvas. TSU trailed 45-39, after trailing by as much as 12 points in the 1st half. The Tigers leading by as much as 8 in the 2nd half, but unable to hold the lead as regulation time expired with the teams knotted at 80.

“They (Alcorn) had the 6th longest winning streak in the country coming into the game, 11 wins in a row,” Coach Davis said.  “When you win 11 games in a row you’re doing something right. They’ve won a lot of close games. We beat them over there by 2 points on a last second tip in, so we knew it was going to be a tough game. We were fortunate to come out with a win.”

The Tigers were paced offensively by Jr. guard Zach Lofton who dropped in 30 points, including 8 in OT on 13-24 shooting. Kevin Scott and Demontrae Jefferson chipped in 17 points apiece to lead a balanced Tiger offensive attack that featured 4 players in double figures.

TSU will enter the SWAC tournament as the No. 1 seed and will host the No. 8 seed on Tuesday in a first round playoff match up.