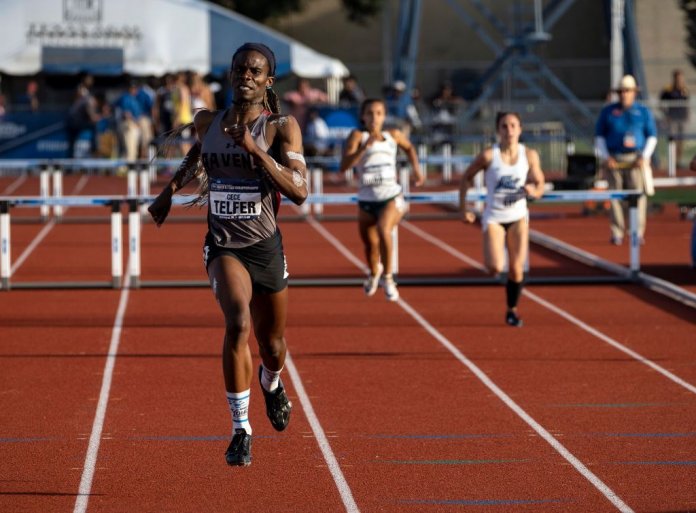 The bad news is that CeCe Telfer’s Division II women’s 400-meter hurdles title at the NCAA Women’s Track and Field Championships was being delegitimized by bigoted transphobic haters who are mad that she transitioned from a man.

But Telfer didn’t break any rule and followed all the proper protocol following her transition two years ago. And while she decidedly did not dominate the competition this season, she definitely won when it counted and took home the top prize for Franklin Pierce University in New Hampshire by winning the most important race of her life on May 25.

Born as Craig, “Telfer was assigned male at birth but said she’s always known she’s female,” WMUR reported. “She competed for three years with Franklin Pierce’s men’s team but stepped away when she started transitioning with hormone replacement therapy.”

Those facts about a college student invited the ugliest levels of hate from the likes of college dropout Candace Owens, who, it must be reminded, once had some very flattering words for Nazi leader and mass murderer Adolf Hitler.

“I still got a lot of, ‘This is unfair’ and people bracing themselves up against a wall because they don’t want to be near me when I’m walking by,” Telfer told WMUR.

According to Deadline, “the 2019 season was her first competing against women, after two years competing with men and 12 months spent undergoing hormone therapy (per NCAA guidelines).”

Still, a group of Australian Olympians had some choice criticism for Telfer and her success.

“The female category isn’t being protected enough in elite women’s sport at the moment,” Tamsyn Manou said after learning of Telfer’s NCAA title.

Two-time Olympic champion Caster Semenya has repeatedly come under fire for having naturally high levels of testosterone, which the International Association of Athletics Federations (IAFF) has argued gives women an advantage in competition. After forcing Semanya to undergo “sex testing” to define “femaleness” for the purpose of athletic competitions. It took Switzerland’s Federal Court to overturn the IAFF’s rule on Monday for Semanya to ultimately be cleared to compete without being forced to take testosterone medication.

Throughout it all, Telfer has maintained that being a trans woman does not give her a leg up on the competition. She had some words for her critics that said as much.

“I would tell them to think about what they’re saying and to do their research and really get more than one source of research, because it’s deeper than the surface,” Telfer told WMUR.