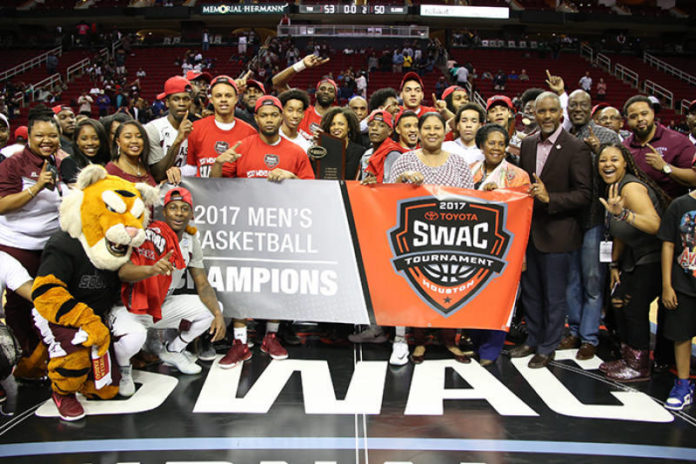 There’s a saying that lightning doesn’t strike twice in the same place, but a contingency at Texas Southern University would beg to differ.  TSU’s men and women captured the SWAC regular season and basketball tournament titles this season.

For women’s head coach Johnetta Hayes-Perry and the Lady Tigers it’s been a history- making season. The Lady Tigers finished the SWAC regular season tied for the top spot with Grambling. As fate would have it, the two teams faced each other in the finals of the SWAC postseason tournament.

After the game Hayes-Perry summed up the history-making win.

“It’s a big deal, but it hasn’t really hit me yet,” Hayes-Perry said. “The team has been celebrating and enjoying themselves. They’ve done something special.  It is a wonderful opportunity for our university for people to see Texas Southern University and our young ladies. I’m excited to be a part of this first-time opportunity.”

“We have seniors on this team who have worked hard to pave the way, who are now champions,” she continued. “This is a victory for all the players who have played previously and never got this opportunity.

“Players like Keiana Vines, who was conference Defensive Player of the Year, now playing in Greece, have all sent messages to congratulate this team. It’s a proud moment for those players who helped pave the way for this team’s success.”

For TSU men’s head coach Mike Davis it was business as usual. The Tigers defeated Alcorn State for the third time this season by a score of 53-50 in the SWAC tourney championship game. The Tigers have now won the conference regular season title three out of the last five years and have captured the tournament crown three out of the last four years.

Because of academic infractions at Alcorn that left them ineligible for the NCAA tourney, the Tigers came into the tournament title game knowing they would be advancing regardless of the outcome. Nevertheless the Tigers still showed their competitive nature.

“It’s very difficult to get up for a game knowing you have already qualified for the NCAA tournament,” Davis said. “It was an ugly game, for both teams, but we stepped up to the challenge. We’re excited to be going to the NCAA tournament.”

The Tigers were paced in the game by the stellar play of 7-foot center Marvin Jones, who was named tournament MVP. Jones, along with teammates Kevin Scott and Demontrae Jefferson, were named to the all-tournament team.