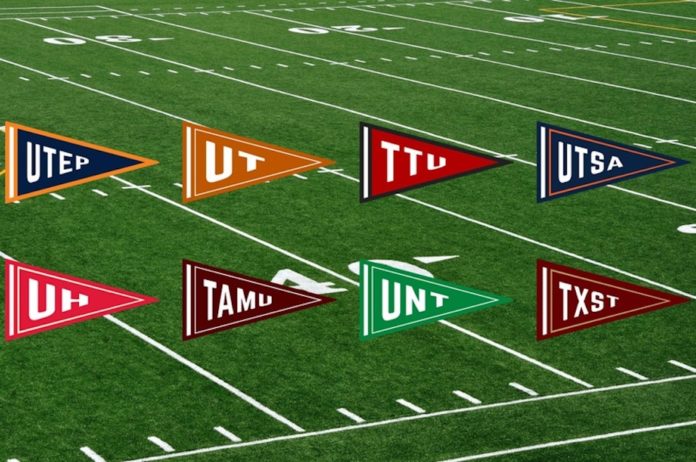 BY MATTHEW WATKINS AND ANNIE DANIEL

The rich keep getting richer in Texas college sports, and the little guys keep having a harder time keeping up. That’s one of the key takeaways from Ballpark Figures, The Texas Tribune’s visualization of money for athletics at the state’s top university athletics programs.

We analyzed the NCAA financial reports for the eight public schools that play the highest level of college football, the Football Bowl Subdivision. You can explore the full app here. Below are some things that grabbed our attention.

Note, however, that these stats are for the 2015-16 sports year. Data for the year that’s currently wrapping up won’t be available until 2018.

Texas A&M University is the revenue king, but its reign is probably temporary.
For the second straight year, A&M topped the state in athletics department revenue. It even surpassed the University of Texas at Austin, long known as the leader in college sports moneymaking.

A&M claimed its perch for one key reason: It was still bringing in contributions to pay for the $485 million renovation of its football stadium, Kyle Field. During the 2015-16 school year, the university collected $75 million in donations. Without that boost, A&M would probably have fallen behind UT-Austin in total revenue.

The gap between rich and poor is bigger for revenue than it is for expenses.
Last year, UT-Austin athletics earned $178 million more than Texas State. But it only spent $140 million more. Why is the gap smaller for spending? Because the big business nature of college sports forces the less competitive universities to spend more than they brought in. Coaches still demand big dollars, facilities still need to be maintained and athletes still need scholarships. As a result, Texas State spent $31.3 million, even though it earned less than $10 million.

Success in football can be a big boost
At UH, total revenue from sports climbed 40 percent — thanks almost entirely to a great 2015 season for the football team. The Cougars went 13-1 and won a major bowl game against powerhouse Florida State. In the process, money from bowl appearances, contributions and ticket sales all shot up to help increase football revenue by $5.4 million. That new money made up about three-quarters of total revenue growth for the athletics department. Meanwhile, spending only increased 15 percent. That allowed UH to shrink the subsidy the university provided its athletics department by nearly $1 million.

Sports are costing students and their schools a lot of money
During the 2015-16 school year, the eight public Texas universities that play top-level college football — and their students — provided $106 million in subsidies for their sports teams. That’s up slightly from $104 million the year before. That money came from two main sources: student fees and cash transfers from the academic side of the school. UH, which forked over $25.2 million, led the way in subsidies. Texas State wasn’t far behind, with a $25.1 million subsidy. UT-Austin and A&M are the only two schools that have entirely self-supporting athletics departments.