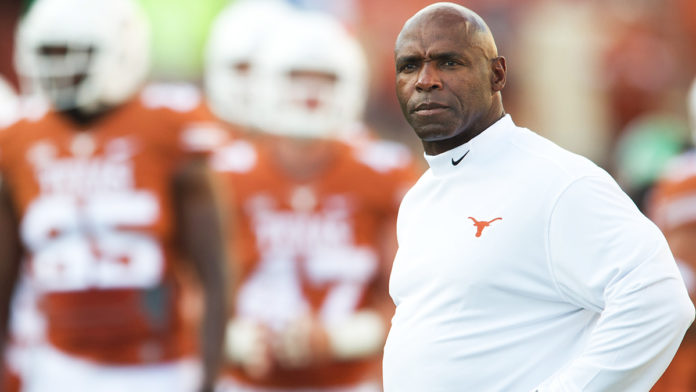 Charlie Strong has been fired as the head football coach at the University of Texas at Austin, the school announced Saturday. And just hours after his dismissal, the school ushered in his replacement, University of Houston coach Tom Herman.

“It’s a very difficult day for me, my family and all of the people affected by this decision,” Strong said in a statement posted online. “I’m most disappointed for these kids and our staff who have poured so much of their lives into this program for the past three years. I do understand that it comes down to wins and losses, and we have not done our job in that area yet.”

Strong’s dismissal follows a disappointing loss Friday to Big 12 rival Texas Christian University. The Longhorns finished the 2016 season with a 5-7 record, and Strong had a record of 16-21 in his three seasons as head coach.

In a separate statement Saturday, UT-Austin President Greg Fenves said that while Strong was an “outstanding leader and role model … the results over three seasons were not there.”

“I am grateful for the contributions Charlie Strong made to our athletics program and the community,” said Fenves. “I wish Charlie, Vicki and their family only the best moving forward. I will forever consider them friends of the university.”

In a news release Saturday afternoon, it was announced that Herman will take over for Strong. While Herman was also rumored to take over at Louisiana State University, then-assistant coach Ed Orgeron was hired as the full-time head coach early Saturday.

“The opportunity to come back to Texas is a dream come true for me and my family, and I can’t thank President Fenves and Mike Perrin enough for providing me with this incredible opportunity,” Herman said. “Longhorn football has been – and always will be – a national power, winning and playing for national championships with great pride and passion, supported by an unbelievable fan base.”

As previously reported by The Texas Tribune, UT-Austin will pay a hefty price to fire Strong. Since the former head coach still has two years left on his $5 million-a-year contract and there’s no buyout in place, he’ll likely be owed the full $10 million even though he won’t coach the next two seasons, according to a copy of the contract.

Herman’s latest extension at UH was worth roughly $1.35 million per year for five years. He is expected to make much more at UT, at least rivaling Strong, and receive a 5-year deal for more than $5 million a year.