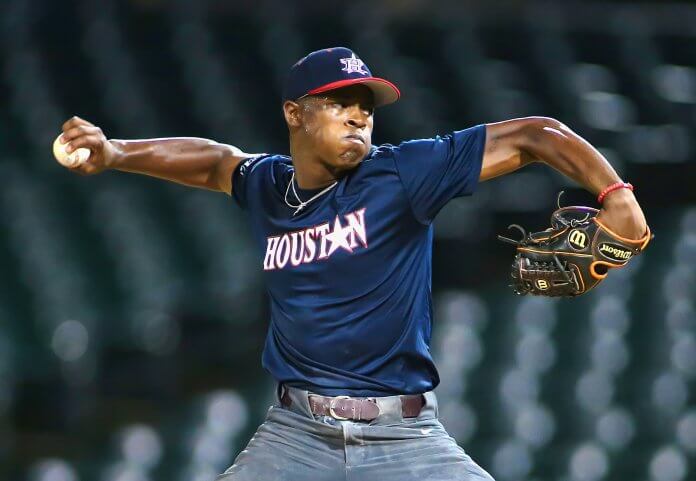 Recent figures show that the percentage of Black baseball players in Major League Baseball increased this year from 7.7 percent in 2017 to 8.4 percent opening day of the 2019 season, its highest percentage since 2012.

Summer Creek High School pitcher and third baseman Andre Duplantier II, a University of Texas commit, seems to be on the verge of pushing those percentages up in the near future.

After Duplantier suffered a minor sprain in his elbow his junior year, which he admits humbled him as a player, his arm appeared to get even stronger once he recovered. At the end of his senior season, Duplantier earned First Team All-District honors as a pitcher with a top speed fastball that clocked in at 94 miles per hour.

Duplantier also took home Second Team All-District honors as a third baseman and was selected by the Greater Houston Area Coaches Association as an All-Star.

The Defender spoke with Duplantier after the All-Star game to discuss his style of play, keys to success in his career and advice to the younger baseball players out there.

Defender: How would you describe your style of play on the mound?

Duplantier:My style is very calm. I know that what I’ve done to get to where I’m at will help me attack hitters. So, on the mound I’m going to attack hitters and pound the zone as much as I can.

Defender: How did you fall in love with the game of baseball?

Duplantier:I fell in love with the game growing up watching my oldest cousin Jon (a major league pitcher for the Arizona Diamondbacks) play the game and I just wanted to play baseball because he was playing baseball.

Defender: What would you say are your keys to success so far in your career?

Duplantier:Staying consistent every day, believing in what I’m doing and trusting what my coaches and trainers are telling me.

Defender: Why was the University of Texas the best fit for your skill set?

Duplantier:I decided to go to Texas because I really enjoyed the campus, the facilities and the coaches were really honest with me.

Defender: What should Longhorn fans be looking out for next year?

Duplantier:Fans should be looking out for a player who is going to do everything he can to help them win a championship.

Defender: What advice do you have for a young Black baseball player who wants to achieve the same success you have been able to achieve so far?

Duplantier:At least get something in every day. Don’t go a day without trying to get better. Even if it’s something small in the mirror it’s going to help on the way down.