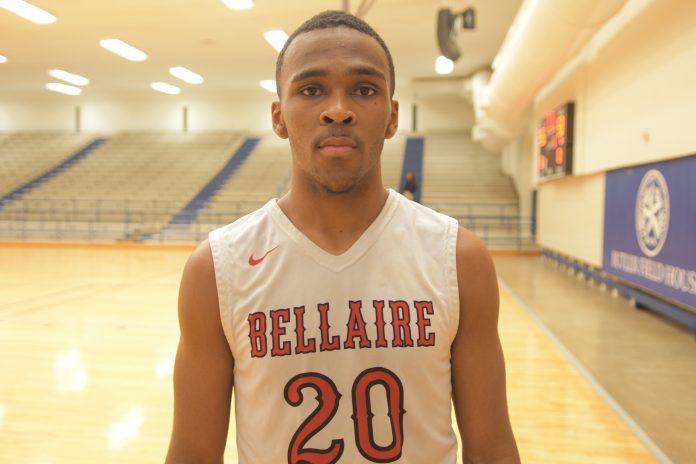 If there is one word to describe Bellaire’s guard Doug Young, it would be “Clutch”. When the game is on the line, Young doesn’t just want the ball in his hands, he demands it.  Time after time Young displayed the ice water in his veins scoring 16 points in the victory over Westside, and 31 point in the loss against #4 area ranked Sam Houston. Young’s confidence and lack of fear of the moment speaks volumes of the fact Young has that it factor.  When Bellaire coach Bruce Glover was asked about what makes Young so special, he states, “Doug does a really good job for us. He has been with us for four years and now it’s his time. Doug relishes his role as a leader. He is the first one in and the last one out, leading the team on and off the court. He is a work in progress and we are proud of where he is.” The Defender spoke with Young about his playing style, love of the game and that clutch gene he possesses after Bellaire’s victory over Westside.

Defender: How would you describe your style of play as a guard?

Young:“Being able to spread the floor, open up for guys, being able to knock down open shots, create for others, and being a team player and a leader.”

Defender: What have been your keys to success so far?

Young:“Personally doing everything I can to help us win. Whether that is defending, scoring or anything my coaches ask me to do, I am going to do.”

Defender: Where does that clutch gene you have come from?

Young:“Preparation from years of playing. Being a freshman on varsity and getting the playing time as a sophomore as a young kid, I didn’t have to dribble the ball as much and I could just shoot. So now that it is my time to step up as a senior guard, I have to help my younger players out who need help controlling the ball in getting these wins like this.”

Defender: How did you fall in love with the game of basketball?

Defender: What is it going to take for Bellaire to close the season strong and make some noise in the playoffs?

Young:“Being tough. Toughness has been the key word for us the whole year. Being able to grind out games. Also, I think it is crucial that when it comes down to the wire, we learn to control the games and win.”