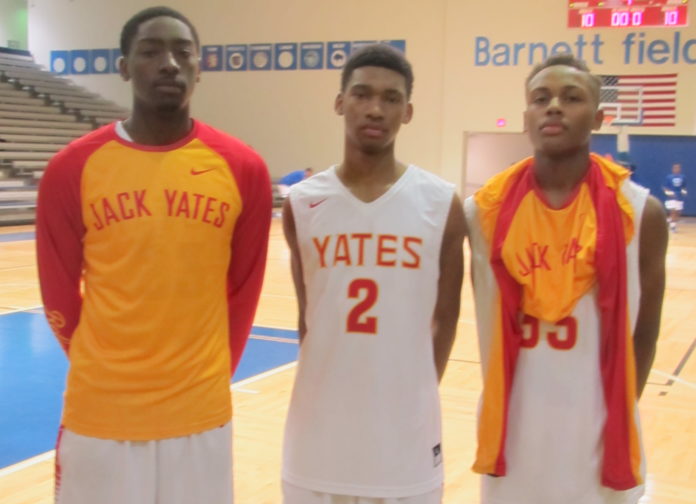 The future is bright for boys’ basketball at Jack Yates High School.

When asked about the prospects of his varsity team moving forward following a recent 113-54 victory over longtime rival Worthing at Barnett Fieldhouse, head coach Greg Wise couldn’t conceal his enthusiasm.

“We’ve got a really young group and we’re taking our time developing them so they can get everything right,” said Wise, who has guided Yates to four state championships during his nine-year tenure.

“We’re getting better and better as the season goes along. By the end of the season we should be playing our best basketball,” Wise said. “With some of the young guys that we have, the future of JY basketball is really bright.”

The 15-member Yates roster has a couple of talented freshmen along with a promising mix of sophomores and juniors to go along with a handful of seniors. The nucleus of this squad will return next season.

The victory over Worthing improved Yates to 10-6 on the season and more importantly 3-0 in District 24-4A with key games coming up against North Forest, Booker T. Washington, Wheatley and Kashmere.

“Any team in our district can beat you on a good day. Worthing didn’t have the depth to stay with us this time,” Wise said. “We’re hoping to tip-toe through the first half of district play without a loss and let the other teams beat up on each other.”

Yates was ranked seventh in the latest Texas Association of Basketball Coaches (TABC) Class 4A state poll while North Forest was No. 22.

“Jock is one of the best kids I’ve ever had in terms of playing ability along with academics,” Wise said. “He’s got a super attitude and is very coachable.

“I think he’s finally seen how good he can be,” Wise said. “He has that capability in him and it’s up to me to get that out of him on a consistent basis.”

Yates advanced to the semifinals of the HISD boys’ basketball tournament before losing to eventual champion Sam Houston.

“Playing against good competition is going to help us get where we want to be at the end of the season,” Wise said. “We didn’t play well in the last two games because of our style of play.

“It’s hard to play four or five games in a two-day period when we’re pressing all the time,” Wise said. “Yet it helps us in terms of conditioning.”

Sophomore Jaquarius Valrie scored a game-high 30 points against Worthing, including 11 consecutive points in the second quarter when the game was decided. Valrie, a 6-4 forward, was 4-of-4 from three-point range.

“He’s really come on lately and one to watch as he matures and gets stronger,” Wise said.

“People think we’re just out there running around, but we run 10 different presses and the players have to know what to do instinctively and not have to think about what they’re doing.”

“His progression from his freshman to sophomore year was about as big as I’ve seen in a player,” Wise said. “It was nearly as big from last year to this year. Mitchell has a chance to be a great player in the near future.”