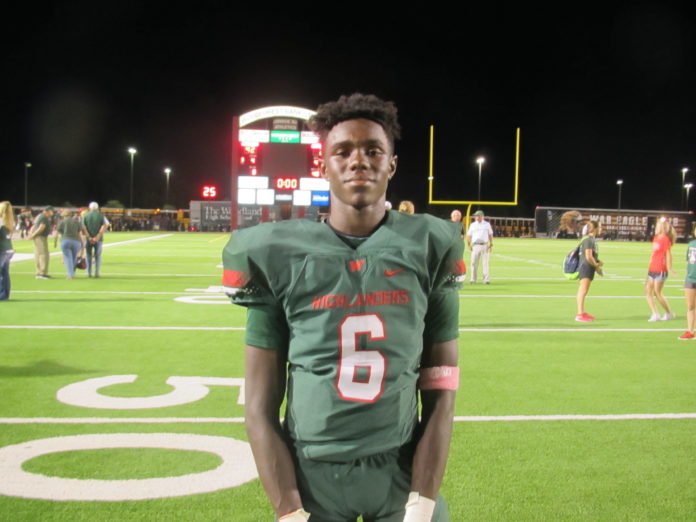 SHENANDOAH – Kesean Carter has earned the adulation of his head coach by overcoming challenges. Carter plays receiver for one of the top high school football programs in Texas.

“Kesean is a big-time playmaker,” said Mark Schmid, head football coach at The Woodlands High School, the No. 1-ranked Class 6A team in the Houston area and among the top five in Texas.

The Woodlands improved to 7-0 on the season, including 3-0 in District 12-6A, with a recent 42-2 victory over Oak Ridge at Woodforest Bank Stadium. Carter, a junior, had four receptions for 89 yards and a 39-yard touchdown catch.

Earlier in the season, Carter had a four TD reception game against George Ranch. He also returns punts for the Highlanders.

“Kesean is an explosive player for us. He’s got great speed (10.5 seconds/100 meters in track) and can stretch the field vertically,” Schmid said. “He has the ability to make big plays once he has the ball in his hands.”

Carter caught a 30-yard pass from senior quarterback Eric Schmid to the Oak Ridge two-yard line that set up the Highlanders’ second touchdown of the game. On the next play Christopher Stewart scored to make it 14-0.

An injury to Stewart last season opened the door for Carter to be promoted from the junior varsity to the varsity four games into his sophomore season.

“We needed some speed to replace a speed guy that got hurt and we inserted Kesean into the lineup,” Schmid said. “He handled that challenge like a champion. This year he’s developed and improved even more.”

Carter, Stewart and Dylan Casey comprise a dynamic receiving corps that is targeted by the son of the head coach. Eric Schmid has already committed to Sam Houston State University.

Casey opened the scoring against Oak Ridge when he was on the receiving end of a 30-yard TD pass from Schmid. Stewart added a rushing touchdown and after halftime Carter contributed his scoring play complete with a move he’d been working on in practice.

After catching the ball near the sideline, Carter unveiled a spin move that freed him to go into the end zone untouched. “I didn’t trust that move before now, but I tried it out and it worked,” he said.

“As a unit we’ve been working hard since 7-on-7 and have developed a connection,” Carter said. “We’ve been practicing and getting better and better every week. Our confidence comes from practicing hard and playing hard.”

“When I came to the big campus, they treated me as a normal teammate and we started doing things together,” Carter said. “We go out to eat together and hang out together. It’s a great situation.”

The Woodlands has remaining league games with Conroe, Montgomery and College Park in an attempt to run the table in District 12-6A. The Highlanders are hoping for a long playoff run in 2016.

“We’re trying to get better every week and play faster and stronger,” Carter said. “We know there’s a target on our back and we’re ready for the challenge.”

How he relaxes – Likes educating his younger relatives

Find out what area-ranked team bit the dust in District 24-5A.