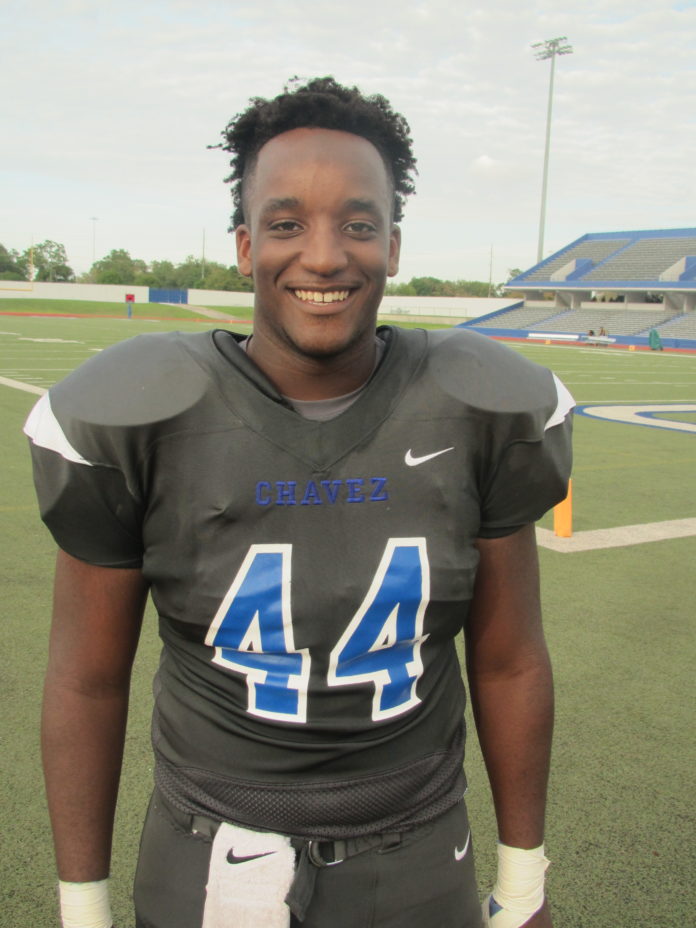 Dominic Franklin made a statement in his final high school football game for Chavez High School.

The 6-foot, 245-pound two-way performer broke off a 71-yard run from scrimmage on the Lobos’ first offensive play and scored from the one-yard line on the very next play.

Later in the game, Franklin scored on a 40-yard burst over right tackle and finished with a game-high 189 yards on eight carries. For good measure he tacked on a pair of two-point conversion runs.

From his linebacker position on defense he registered a quarterback sack for an eight-yard loss.

“I really don’t have a preference for offense or defense,” he said. “I like to be a dog on the defensive side and a killer that nobody wants to touch on the offensive side. I’m thankful that I can play both sides and I do it willingly.”

“Unfortunately we came up short of our goal to make the playoffs, but we finished strong in our last game and I can remember this looking ahead to college,” Franklin said.

“It’s a blessing that God gave me the talents that I have and my teammates gave it their all to send the seniors out with a victory,” Franklin said. “I really respect that and thank them.”

With the 189-yard rushing effort in his final game, Franklin topped the 1,000-yard mark and ranks among the leaders in District 18-6A that includes Lamar, Westside, Heights, Bellaire, Sam Houston and Westbury.

“If somebody wants a big back we definitely would welcome that opportunity,” said Chavez head coach Cory Jiles. “The kid can play and he can play at the next level.

“He’s got great grades, a good SAT score and been a model citizen and ambassador for this program for the past four years,” Jiles said. “We brought him up to the varsity about the fourth or fifth game of his freshman year and he’s been a very important part of our program ever since.”

Jiles added that he’s going to miss Franklin’s leadership, dedication and commitment to the sport.

“He never missed a day during the summer. He made it through the entire strength and conditioning program for the past two years,” Jiles said.

“Dominic started out as a three-sport athlete. He played football, basketball and baseball,” Jiles said. “He’s a great leader and inspiration for these younger kids.

“He encourages his teammates and we win as a team and lose as a team. If I had 10 more like him we might be in a better situation,” Jiles said.

Franklin is looking forward to navigating his way through the remainder of his senior year with hopefully a prize at the end of the journey.