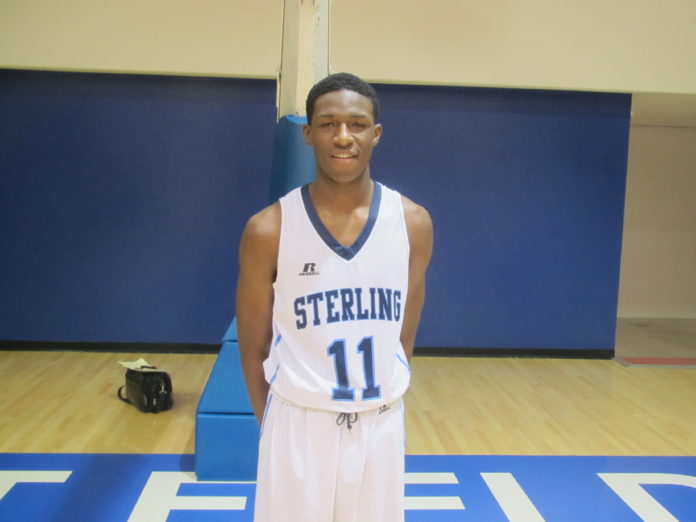 Corey Nickerson remembers three milestones in his young life that have led to his maturation into a standout high school basketball player.

In the fifth grade he noticed that he could run faster than many of his classmates. While in the seventh grade a growth spurt triggered that took him from 6-feet to his current height of 6-foot-7.

“By the time my eighth-grade year came around I had gained confidence that I could be a good basketball player,” Nickerson said.

Fast forward to January of 2018 and Nickerson is a junior at Ross Shaw Sterling High School in Houston.

Now in his third year of varsity competition, Nickerson has become a cornerstone for the Raiders with averages of 17.8 points, 15.3 rebounds and 4.0 blocked shots per game.

“I’m driven to improve on my weaknesses,” Nickerson said. “However much work I put in, I can live with the results.”

Following a recent 73-37 victory over Waltrip at Barnett Fieldhouse, Sterling improved to 15-8 on the season and 8-2 in District 24-5A. Nickerson finished with 10 points as the Raiders’ bench brigade received extended playing time.

The two losses were by three points to Houston Madison and a one-point loss in overtime to Furr. “We’re looking forward to both of those games,” Nickerson said. “We’re coming for them.

“I need to get a little more aggressive on the court. That would make a big difference in how I play and how I do certain things in the game,” Nickerson said. “Everything else is where it needs to be.”

Sterling head coach Andrea Young has seen a big improvement in Nickerson between his sophomore year and this year.

“His rebounding has gotten a little better and his scoring has improved a lot along with his defensive intensity,” Young said.

“A player like him doesn’t come around too often,” Young said. “So when you get a player with his skill set, you try to enhance the things that he does well, but also work very hard on those things he doesn’t do so well.

“When he learns to be more aggressive on a consistent basis, we’re going to be a hard team to beat,” Young said.

“I’ve got to improve my post play,” Nickerson said. “Everything from rebounding to my jump shot from the free-throw area. I see improvement from last year.

“One of my goals coming into this season was to improve my free-throw shooting,” Nickerson said. “Last year I shot 47 percent from the free-throw line and this year I’m up to 58 percent and I hope to improve on that as the season goes on.

“I’m working hard on my aggressiveness in the paint and my free-throw shooting,” Nickerson said. “My last three years under Coach Young have been an unbelievable experience. He’s taught me a lot of good stuff.”

Nickerson has already attracted the attention of area colleges, including the University of Houston.

World problems he would solve – Homelessness and hunger