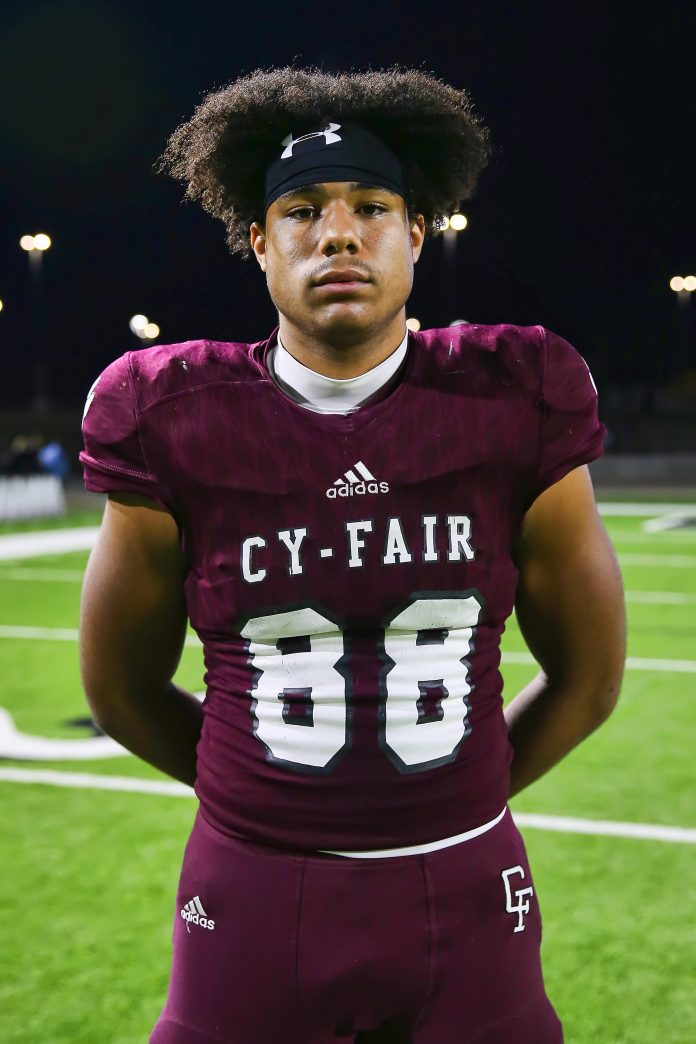 Football is the perfect sport for Cy-Fair senior tight end Bayne Tryon, a Tulsa University commit. Despite only having three touchdowns for the season, Tryon made his presence felt early when he kicked off Cy-Fair’s playoff run with a touchdown catch on the opening drive of a 65-20 victory over Bellaire.

At 6-feet2, 205 pounds, Tryon is a mismatch waiting to happen. When matched up against bigger linebackers, Tryon can use his speed and route-running ability to create space. Then when he faces smaller defensive backs, he can simply leap over them with his deceptively long wingspan.

Cy-Fair head coach Ed Pustejovsky explained what makes Tryon such a special addition to the offense.

“He’s a big, smart, athletic kid who can run,” Pustejovsky said. “We can do so many things with him. We can attach him at tight end, spread him out wide, and obviously he has been able to do a lot for our offense.”

The Defender spoke with Tryon about his style of play, the opening touchdown he scored against Bellaire and his reasoning for committing to Tulsa.

Defender: How would you describe your style of play as a tight end?

Tryon:I would say I bring speed and agility. I’m not your typical tight end.

Defender: Walk us through your touchdown catch against Bellaire?

Tryon:We faked the stretch run and I came behind the line into the flats. I realized the safety wasn’t keying me. Carter [Cravens] threw the ball to me and I walked in. It was a piece of cake.

Defender: It seemed that Cy-Fair hit another gear in the second half. What happened in the locker room during halftime?

Tryon:During halftime we had some major adjustments. In the first half they came out with some things that we weren’t expecting and we just really improved on those things, got them fixed and had a good outcome.

Defender: Why did you feel Tulsa is the right fit for you?

Tryon:Tulsa is perfect for me because I really liked the coaches there. I liked the smaller school feel and the education there is elite. Nothing else compared to that because that is what is most important – education.