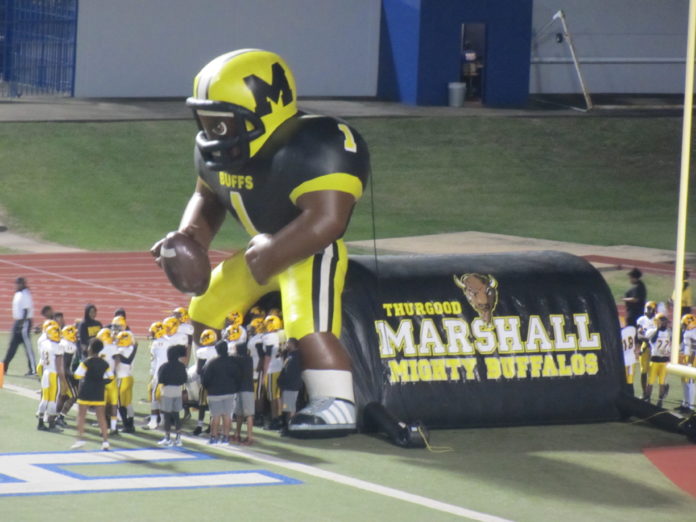 The stars are aligned for the Fort Bend Marshall Buffalos to experience phenomenal success during the 2017 high school football season.

Eighteen starters return from a squad that finished 11-3 and advanced to the Class 5A state quarterfinals.

The entire Marshall athletic program is coming off a banner year where the football team made it to the fourth round, the boys’ basketball made its first trip to the state tournament and the girls’ track team won a regional crown.

Marshall advanced to the state quarterfinals in football with a 13-1 mark in 2012.

There’s a winning vibe at the school and a senior class dedicated to continuing that trend.

“We’re coming off a very successful season,” said senior defensive back Geovante Howard. “We want to come back this year and win state.”

Senior quarterback Jabari James, a Texas Tech pledge, accounted for 39 touchdowns in 2016. Wide receiver Henry Thomas had 14 touchdown receptions and will be heading to the University of Houston following the completion of his high school career.

Jerry Davis is back to lead the ground attack after rushing for 1,425 yards and 12 TDs. The Marshall offensive line is anchored by 6-foot-3, 305-pound tackle Barton Clement, a Texas A&M commit. Clement is a four-year starter who hasn’t given up a sack in two years.

Korey King (WR) and Antonio Brooks (DB/RB) are other talented players to watch for in 2017.

Winning the District 23-5A championship will be no easy task with the likes of Manvel, Fort Bend Elkins, Texas City, Galveston Ball and Willowridge lurking on the horizon.

Both the District 23-5A champ and runner-up will likely contend for a state crown in 2017.

Marshall teams pride themselves on character, discipline and hard work. During the spring, Williams and his staff had the team focus on fundamentals and discipline.

Manvel is also coming off a trip to the state quarterfinals in 2016 with 12 returning starters from a 13-1 squad. A 24-23 loss to Temple last December has the Mavericks motivated to greater heights in 2017.

Elkins head coach Dennis Brantley guided the Knights to the playoffs with a late surge in the final weeks of the 2016 regular season that included a double overtime win over Marshall.

Offensive lineman Luke Matthews is one of the top college prospects in the nation and he’s committed to Texas A&M.