It was a typical night at the ball yard for the George Ranch Longhorns varsity baseball squad.

The No. 1 ranked Class 6A high school baseball team in Texas defeated perennial powerhouse Pearland 11-4 on the road and in blustery conditions.

“It was a pretty complete ball game. We hit the ball well and defensively we were sharp,” said George Ranch head coach Greg Kobza. “Pearland put the ball in play and we were able to convert those into outs.

“We got big hits in some key spots,” Kobza said. “It was a fairly solid effort all the way around.”

The senior-laden Longhorns improved to 19-1 on the season and 4-0 in District 23-6A with one of the few non-seniors providing a standout performance. Junior lefthander Joseph Menefee gave up two runs over five innings to pick up the victory.

Menefee’s bases-loaded first-inning double plated the game’s first two runs and he finished the game 3-for-4 with two triples, three RBIs and a steal of home. He moved to first base in the sixth inning and recorded all three put-outs, including a diving stop to the glove side.

“Joseph’s been steady for us all year long,” Kobza said. “He can play multiple positions [leftfield, first base] and he throws very well for us. He swings the bat too, and he did a heck of a job tonight.”

Menefee and his teammates are enjoying life at the top following the move up from Class 5A.

“There’s no pressure on anybody and we can all just play our game,” Menefee said. “We practice hard and have a great time and it shows on the field during games.”

Senior rightfielder Dylan Rock added two singles against Pearland, Jake Zatopek had a triple and a run scored and centerfielder Bryce Debbs had an RBI and a run scored. Zatopek tossed an inning in relief.

“We have kids that play multiple positions,” Kobza said. “My leftfielder [Ty Abraham] can also play shortstop. So we move around a little bit. We’re not defined at one position and that gives us some depth.”

Debbs is one of the team’s senior leaders along with Kyle Boudreau, Josh Lapierre, Bradley Armstrong, Bailey Allen and Zack Holzhuter.

“Bryce is going to get out there and do a good job for me,” Kobza said “I have a lot of confidence in him. He’s one of our better defenders.”

Debbs says it’s been a long road starting organized baseball when he was 9 years old and getting to this point. After serving as a reserve last year, Debbs relishes his role as a steady contributor for the Longhorns.

“This is my senior year and I’m just trying to give it my all,” he said. “Coach Kobza makes us work hard and he keeps it fun for us. It means a lot to be No. 1 in the state.” 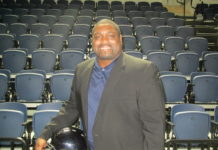