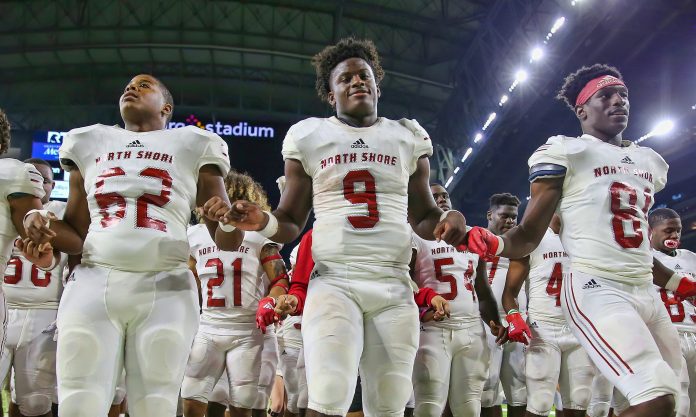 About a year ago, three Houston teams went to state yet only one of them reached the mountain top of state championship glory.

Today H Town is one game away from having four greater Houston area teams headed to state as the state semifinal rounds kick off. Here are the final four teams still alive in the chase for a UIL state championship.

Quality Wins: Win Over Katy 56-35 in the Regional Playoffs, Defeated Atascocita 76-49 in the State Quarterfinals

Notes: North Shore is on a mission to repeat their state championship of season’s past with a big, strong and battle tested offensive scheme that routed through Katy and Atascocita in the playoffs. All signs show North Shore will face off with Dallas powerhouse and #1 ranked team in the state, Duncanville, in a rematch for the Class 6A Division 1 State title. My primary concern with North Shore is that their best wide receiver, junior Shadrach Banks , a Texas A&M commit, will likely be out or play injured throughout the remainder of the playoffs. As a result,  this will likely force North Shore quarterback, Dematrius Davis, and running back, Zach Evans, to step up as they have pretty much done in every game up to this point.

Key Losses: Lost to North Shore 24-21 in Week 3 of the regular season

Quality Wins: Knocked Tomball Memorial out of the area playoffs with a 36-26 win, beat Dallas Jesuit by 38-28 in the state quarterfinals.

Notes: Throughout this year Westfield has truly exceeded expectation and shut up the doubters. In their one loss against North Shore, they put up an effort that took the game down to a last minute field goal and since have grown from the loss going undefeated. The team’s identity of toughness is led by its ferocious defensive line, who includes defensive line playmaker Nick Booker Brown, a highly sought after, uncommitted prospect, and D-lineman Tim Hardiman, a Navy commit. If the offense can keep Westfield in games like they did in the state quarterfinals against Dallas Jesuit, Westfield could shock the World and walk away with a state title come seasons end.

Quality Wins: Put the smack down on Hightower 53-9, Defeated Foster in regular season and playoffs, beat Hutto by a score of 63-24 in the regional playoffs.

Notes: Since the Sharks took their only loss in 3 seasons at the 2018-19 state championship in their team debut in Class 5A last season, Shadow Creek has been nothing short of exceptional ever since. Throughout their 14 game win streak they have dominated both sides of the line of scrimmage with little to no margin of error. Hence it is now rumored the team will most likely move up to Class 6A sooner than later. My primary concern with the Sharks is the injury to safety Xavion Alford, a recent University of Texas commit and their best defensive playmaker according to recruiting sites. In Shadow Creek’s final two games they’ll have an uphill battle going up against San Antonio Wagner in the semifinals, and either Ryan or Lone Star in the state title game.

Key Losses: Lost to Manvel 38-34 in Week 4 of the regular season

Notes: Despite being favored to repeat their state championship appearance at the beginning of the season, the doubters made Manvel the favorite in the division after Manvel beat Marshall in their house. But now that Marshall has had the final say in the matter with a recent playoff win over favored Manvel, they are in the driver’s seat to go back to state and possibly win the whole thing. My only concern is they’ll have to face the same team that beat the brakes off of them in last season’s state championship, the Class 5A #1 team, Aledo, who returns premiere running back, Jase McClellan, a University of Oklahoma commit, who did a number on Marshall’s defense last year.