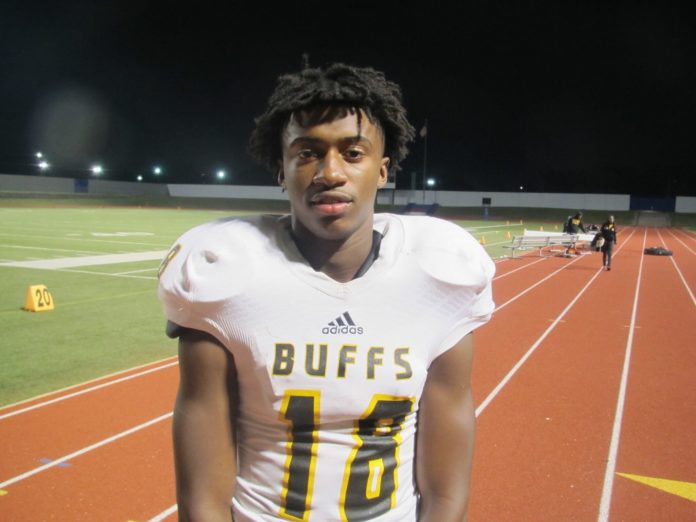 Jabari James has served notice that he’s ready for the bright lights of the playoffs.

The first-year starting quarterback for the Fort Bend Marshall Buffalos was outstanding in a 52-12 bi-district win over Houston Sterling at Barnett Stadium. In just two quarters of action James accounted for five touchdowns, including three by air and two on the ground.

Marshall (9-2) posted the first two touchdowns of the game as James connected with Henry Thomas for a 21-yard TD pass and followed that with a 12-yard TD pass to Korey King.

James sandwiched a pick six 28-yard interception return by Trebien Moreno with touchdown runs of 19 and 14 yards for scores. The junior double threat capped off his first-half highlight reel with a 25-yard TD pass to Thomas.

The Buffalos led Sterling 42-6 at the break.

“I just came out here and had fun,” said James, who battled sophomore Kacey Barnett for the starter’s job during spring workouts. “We watched a lot of film on Sterling and came out and executed as a team and got the job done.”

Marshall will take on perennial playoff qualifier Crosby in an area round Class 5A Division II playoff game this week.

James takes pride in being a double threat quarterback, similar to the University of Louisville quarterback Lamar Jackson, a Heisman trophy candidate.

“Jabari’s done a tremendous job. This is his first year as a full-time starting quarterback and he’s getting better every week,” Williams said. “He’s throwing the ball really well now and he’s always had the physical ability to run the ball.

“So it’s really good to see him coming along as a passer and that makes him a tough cover,” Williams said. “He’s come a long way as a player and a person from his freshman

Marshall was the runnerup in District 23-5A to outright champion Manvel. Elkins and Willowridge earned the district’s other two playoff berths. All four schools won first-round playoff games.

“Every game in our district was a fight,” James said. “There were no walk-throughs and our coaches stayed on us and helped us fight through it.”

Along with the play of his quarterback Williams saw some other good signs from his team in the opening round of the postseason.

“We saw a lot of good things and we were able to play with class and character,” he said. “Every week in the playoffs you’re going to face deserving teams and we just want to come and play our game.

“In the second half some of our guys got a little too relaxed and we gave up some points that we probably shouldn’t have,” Williams said. “It’s always good to get a win and we’re always appreciative of it.”

Which Houston schools qualified for this weekend’s 2016 girls’ state volleyball tournament in Garland?