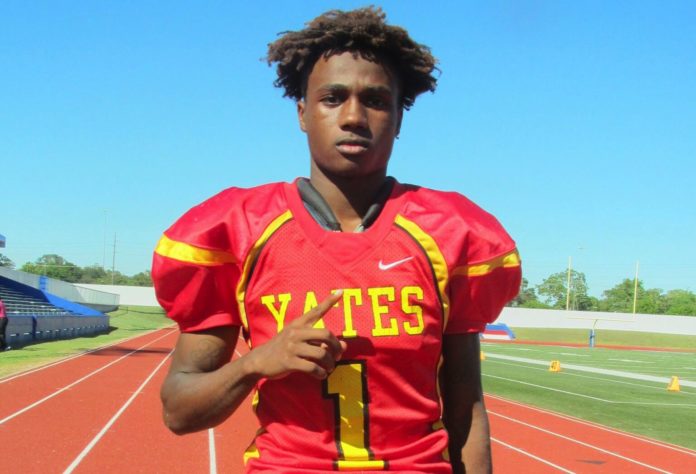 Reginald Bryant possesses a key intangible that every successful football player must have.

The Yates High School junior running back wasn’t blessed with ideal size or speed. Yet when the Lions take the field every week, he’s the one individual every opponent has to take into account.

“Reginald’s got a lot of heart. We call him pocket Hercules,” said Yates head coach Michael Watkins. “He’s only 125 pounds. Yet he plays like a 225-pound back. He has an undying heart for the game of football that you won’t find in many other players.”

Yates secured its sixth win of the season and improved to 4-1 in District 11-4A with a 60-0 victory over Scarborough. It was another typical performance for Bryant with 118 yards on nine carries and scoring runs of 18 and three yards.

“When I was growing up I loved watching the sport so naturally I wanted to play,” Bryant said. “I came to Jack Yates because that was my favorite team to watch growing up. I want to be a part of the team that brings a championship back to Yates.”

Bryant has been called the heart and soul of the Jack Yates Lions varsity football team. For the past two seasons he’s been the leading ground gainer despite his diminutive stature.

In the first half against Wheatley, Bryant suffered a leg injury and only played one play in the second half. The next week he was back in action as the Lions celebrated homecoming with an important 8-7 league win over rival Worthing.

“I just stayed focused on trying to make my leg better,” Bryant said. “My health coach helped me out.

“I don’t mind taking the contact. Getting hit is a part of the game. I love to run and I wanted to get back on the field so I could help my team win,” Bryant said.

Watkins believes Bryant’s quick recovery from a potentially season-wrecking injury is a testimony to his player’s mindset.

“He came in hobbling on crutches early in the week,” Watkins said. “We got him in to see the doctors and trainers and they were able to nurse him back to health.

“The weight-room regimen that we’ve implemented here has worked wonders for the confidence of the kids.

“I’m excited to see how this young man will grow once we get a year of off-season conditioning on his body,” Watkins said. “He might be vertically challenged but he’s not challenged in his heart.”

After missing the playoffs for the first time in three decades last season, Yates has already clinched a playoff berth in 2016 with one regular-season game remaining against Booker T. Washington (Oct. 29/Delmar Stadium/6 p.m.).

The Lions will have a bye on the final week of the regular season and will be rested heading into the postseason.

“My goal coming into the season was to win state,” Bryant said. “That will always be my goal.”

How he relaxes – Exercise workout