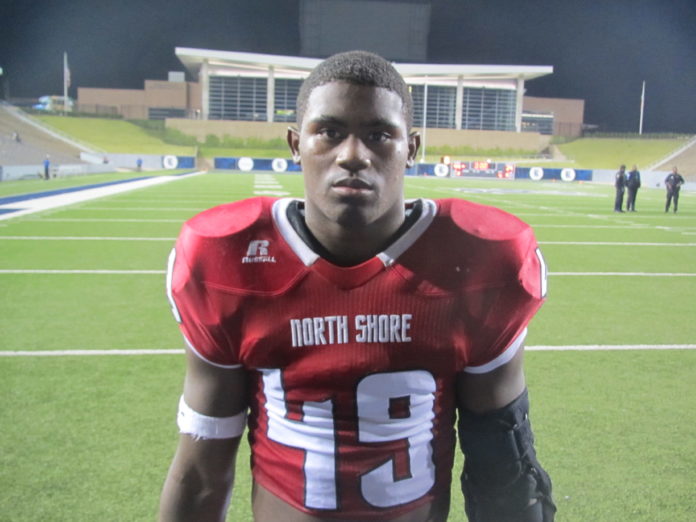 A talented group of underclassmen helped North Shore rebound from three early-season losses in the 2017 season. Yet it took senior Jacoby Allen’s precision timing and keen leadership to guide the Mustangs back to the regional finals for the third consecutive year.

With Lamar driving inside the North Shore 20 on the Texans’ opening possession of a Class 6A Division I Region III semifinal at Rice Stadium, Allen may have supplied the biggest single play of the game.

Allen’s pick-six interception from 86 yards out supplied the first score of the game and North Shore never wavered in a 44-29 victory over Lamar that propelled the Mustangs into a Dec. 9 regional final against unbeaten Katy at NRG Stadium. Kickoff is set for 2 p.m.

“Jacoby’s play helped settle down some of our younger kids on offense,” said North Shore head coach Jon Kay. “We needed a play to be made at that time and it took the pressure off some of the other kids that felt like they had to shoulder the load. They were able to relax and get back into their game.”

Four consecutive carries by Evans netted the first of his four touchdowns in the game, this one on a three-yard run. Less than six minutes into the game North Shore held a 14-0 advantage.

Allen, who also recorded two quarterback sacks in the contest, had a simple explanation for the early dominance by the Mustangs.

“We were just playing North Shore football, that’s it,” he said. “I was doing what I was told at the time. My coach told me to look for the ball and that’s what I did.

“I was looking for the end zone and wanting to celebrate with my teammates after the play,” Allen said. “We prepared for them (Lamar) the same way we prepare for everybody else. For us, it’s about playing North Shore football.”

Both North Shore (Division I) and Katy (Division II) won Class 6A state titles at NRG Stadium in 2015.

“Jacoby is a great leader. He’s been through these battles a few times already as a three-year varsity guy,” Kay said. “He’s a guy that understands how we practice and how we prepare. He’s been a great influence on these young kids.”

North Shore led Lamar by as much as 28-0 in the first half before D’Shawn Jamison returned a kickoff 79 yards for a touchdown right before halftime. The Texans (9-2) were limited to 89 yards in the first half.

“I look forward to playing with my teammates one more time,” Allen said. “It’s what makes me happy.”