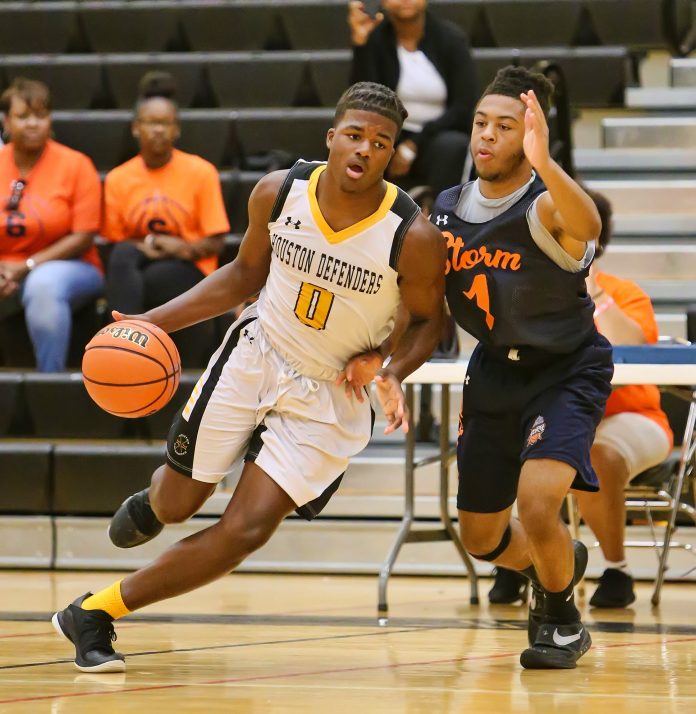 As a sophomore, Dobie High School’s Johnathan Baldwin started on his school’s varsity football team as a safety and played on the varsity basketball team as well. Going into his junior year Baldwin has earned unofficial looks at some of the biggest college football programs in the state.

At the recent Juneteenth Shootout, Baldwin helped carry his team past the Storm in the semifinal game before he added 14 points to a 56-47 victory over Basketball University in the finals.

“Johnathan Baldwin is a big-time strong safety who is probably a four-star recruit being recruited by TCU, Texas A&M and Texas. He also brings a strong basketball asset to the team.”

The Defender spoke with Baldwin about his skills in basketball and football.

Defender: How would you describe your style as a shooting guard?

Baldwin:I like to slash to the rim and if I have the open shot then I’ll take it.

Defender: What is your approach as a safety on the football field?

Baldwin:As a safety I like to tackle people and be aggressive

Defender: How does basketball help improve your skills on the gridiron?

Baldwin:Playing basketball, I can be aggressive with the little point guards and when I get a big man I can just beat him off the dribble with my speed. Basketball also helps me with my quickness and stamina.

Defender: What were the keys to your success in the Juneteenth Shootout?

Baldwin:Turnovers and making our layups.

Defender: Why should recruiters take a second look at you in the years to come?

Baldwin:I am very coachable and dedicated to everything that I do.

Shout-outs: “All my teammates who support me every day and my coaches who believe in me

and put me on the court.”