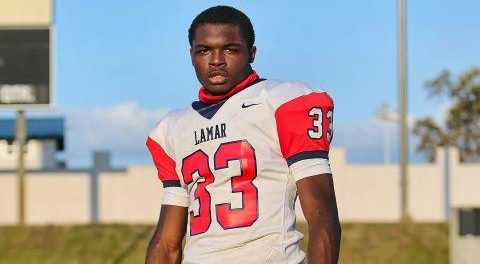 In 3rd & short, 4th & short and goal line scenarios, football becomes a game of inches wherein a players’ heart and will decide the outcomes. Lamar junior running back Kenneth Kennedy runs with such heart.

Kennedy’s reckless abandon running style put defenders on their backs asking for the trainer more than a few times in the Texans 63-21 blowout win over Westside. Kennedy finished the game with two goal line touchdowns.

Currently, Lamar is tied with Heights atop the 6A Region III 18 District with a 5-0 district record. A district champion will be crowned in Lamar’s final regular season game against Heights Friday, November 13th at Barnett Stadium 7pm.

The Defender Network caught up with Kennedy after the game to discuss his style of play, the Westside victory and more.

Style of Play
I play with heart. I come out every day and work at practice so that at game time its everything on the line. So, I run with heart.”

Westside Victory
“O-Line executed and everybody executed. We come out every day to work. We are never satisfied with what we do. We just keep working because that’s what we do.”

One-on-One Scenarios
“It’s all heart. It’s all a mental thing. If you come out with that mindset and play with that swagger you are going to do what you have to do.”

Heights Matchup
“Come this week of practice we are going to watch film, work hard and get better. We are going to have to come together and play our game.”