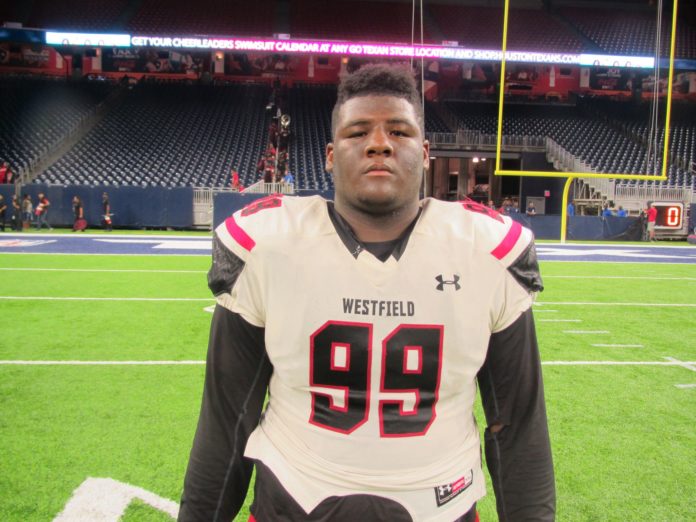 Keondre Coburn did the simple math and it equated to a positive outcome for his Spring Westfield football team in a second-round playoff game against Round Rock Stony Point at NRG Stadium.

The Westfield defense stymied Stony Point with a relentless performance that included six quarterback sacks, holding the Tigers to 61 rushing yards on 40 carries and a big goose egg on the scoreboard.

“We wanted to help out our offense and we knew that if they (Stoney Point) didn’t score, we’d win,” said Coburn, a math enthusiast, who registered a team-high two sacks in Westfield’s 24-0 victory that advanced the Mustangs into this week’s Class 6A Division II Region II semifinals.

Westfield will take on either Beaumont West Brook or Garland Lakeview Centennial in the next round of the playoffs.

“Putting pressure on the quarterback and stopping the run was our game plan and we were able to do that,” said Coburn, a junior 6-foot-2, 308-pound defensive tackle who already has scholarship offers from Texas A&M, Oklahoma, Michigan, TCU, University of Houston, UTSA and Arizona.

“It feels awesome to get a shutout in the playoffs and to get one in NGR is amazing,” Coburn said. “Don’t think too far ahead and keep working. That’s our mindset.”

“We thought we were done when we were 0-3,” Coburn said. “We came back to practice every day and strived to be the best. I think that’s what we’ve been doing lately.”

“It all starts up front and we’ve got four explosive defensive linemen,” said Westfield head coach Matt Meekins. “With the bright lights in this stadium, I felt like I was at home sitting on the couch in front of a big-screen television.

“I was up-close and personal watching our d-line get after it tonight. All of them did a good job, including Keondre, Azuka Mgbemena and Joshua Carr. They’ve been doing that for us all year.”

Westfield is building a reputation for producing top-notch defensive linemen in the mold of University of Houston freshman standout Ed Oliver, a Mustangs’ alum.

“First of all, it’s great to be included on the best list with an Ed Oliver,” Coburn said. “And to get (scholarship) offers from all these schools is an honor.”

Meekins isn’t surprised by his team’s surge following the first month of the season.

“We do run a pretty nice little program as far as the off-season goes,” Meekins said. “Our kids work hard and they come back after school and continue working in the weight room. We have a great relationship with our kids and they enjoy being around each other.”

If he could solve any world problem – Violence 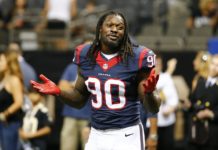